Belair is a suburb in the south eastern foothills of Adelaide, South Australia at the base of the Mount Lofty Ranges.

Belair was established during the settlement of Adelaide as a source of timber. Parts of Belair have views of the city of Adelaide, the Adelaide Plains and the coast. Belair National Park is one of the major attractions of the suburb, and Windy Point (formerly known as Observation Point) provides a 230 degree panorama making it one of the best lookouts over the city, the plains and the coast.

Belair is also a very popular area for mountain bikers. There are bike trails not just in the National Park but throughout Belair, and steep tracks down the hills face to railway stations on the Belair line, which terminates adjacent to the National Park.

The origin of the name 'Belair' appears uncertain. Gustav Ludewigs, who subdivided the area, may have named the suburb after Bel Air, Martinique, being his wife Maria's birthplace. Another theory is that it was named in 1849 after Eugene Bellairs, a Government surveyor who lived in the area. 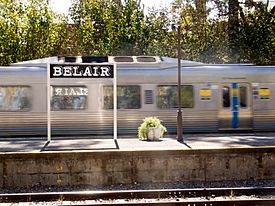 A Belair Post Office opened on 3 April 1859; it was relocated in 1881 to near its present position and the original office renamed Blackwood.

Belair is approximately a fifteen-minute drive from the Adelaide city centre. Belair railway station is the terminus of the suburban Belair railway line.

There are numerous mountain biking tracks throughout Belair, and the City of Mitcham is expanded and formalised these tracks in the early 21st century. In November 2010 a two-metre-wide bitumen track opened between Caroline Avenue, Belair, and Beagle Terrace, Lynton, providing a trail for cyclists as an alternative to the dangerous curves of Belair Road. There are other tracks leading down to Lynton Train Station and Mitcham.

At the 2016 census, Belair had a population of 4,411, up from 4,390 at the 2011 census. Among this population there were only 20 Aboriginal and Torres Strait Islander people recorded in the 2016 census, making up just half a percent of the suburb's population, well below the national average of 2.8%. Belair is also an older suburb, with a median age of 46 and 23.4% of the population over the age of 65. 89.9% of people only spoke English at home, and 73.8% reported that they were born in Australia, with England being the only other country of birth accounting for more than 1% of the suburb at 10.2%. These were the most commonly nominated ancestries:

Belair Primary School opened in 1957 or 1958. It consisted of two campuses: a junior primary (originally known as "Belair Infant School", and later renamed to "Belair Junior Primary School", and a separate upper primary school. The junior primary campus closed in 1997, and since then Belair Schools consists of a co-located junior school and an upper primary school situated on Main Road, Belair. The schools have Eco-school status, and follow the International Baccalaureate syllabus. In 1999 the schools twinned with Momoyama Elementary School in Kyoto, Japan. Every two years, during May, a group of students and staff travel to Kyoto. In the alternate year, Momoyama students and staff visit Belair during August. These visits have become an integral part of the schools' Japanese language and cultural programme.

St John's Grammar School also has a junior campus adjacent to the railway station and senior campus located towards the west of the suburb. Actors Ben Nicholas and Sarah Snook are some of its more famous graduates.

All content from Kiddle encyclopedia articles (including the article images and facts) can be freely used under Attribution-ShareAlike license, unless stated otherwise. Cite this article:
Belair, South Australia Facts for Kids. Kiddle Encyclopedia.