Blackwood is a south eastern suburb located in the foothills of Adelaide, South Australia. It is part of the local government area of the City of Mitcham.

The first use of the name "Blackwood" appears to have been before 1880, in reference to the "Blackwood Inn", a small hotel located where the Belair Hotel now stands. It was probably derived from the Australian Blackwood tree which grows in the area.

Land was first subdivided for housing in 1879, a Methodist church was built in 1881, and the Blackwood railway station opened in 1883. Belair Post Office opened on 3 April 1859 and was renamed Blackwood in 1881, when the Belair office was moved some distance away.

Blackwood Soldiers' Memorial was erected in 1921 in the most prominent place in Blackwood: the five-ways roundabout. It is a place of Local Heritage, listed for being "a notable landmark in the area".

Wittunga Botanic Garden, originally a private property with English gardens established in 1901, is located in Blackwood and features displays of Australian and South African plants.

Blackwood High School and Blackwood Primary School are located nearby in Eden Hills.

Since the late nineteenth century Main Road Blackwood and surrounding areas have formed a vibrant and diverse food and retail centre. 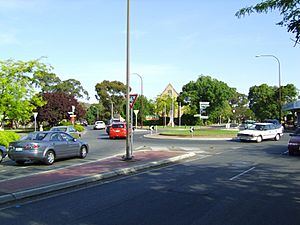 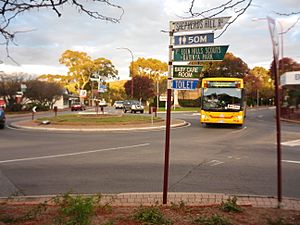 All content from Kiddle encyclopedia articles (including the article images and facts) can be freely used under Attribution-ShareAlike license, unless stated otherwise. Cite this article:
Blackwood, South Australia Facts for Kids. Kiddle Encyclopedia.