Government of Arizona facts for kids

The government of Arizona is the governmental structure of the state of Arizona as established by the Arizona Constitution. The executive is composed of the Governor, several other statewide elected officials, and the Governor's cabinet. The Arizona Legislature consists of the House of Representatives and Senate. The judiciary is composed of the Arizona Supreme Court and lower courts. There is also local government, consisting of counties, municipalities and special districts.

The statewide elected officers are:

All elected officials hold a term of four years, and are limited to two consecutive terms (except the office of the State Mine Inspector, which is limited to 4 terms). Arizona is one of seven states that do not have a specified lieutenant governor, so the Secretary of State is the first in line to succeed the Governor in the event of death, disability, resignation, or removal from office. The line of succession also includes the attorney general, state treasurer and superintendent of public instruction. Elections for statewide officers occur during even numbered, none presidential, years, except that 3 of the corporation commissioners are elected during presidential years.

The state departments and agencies are: 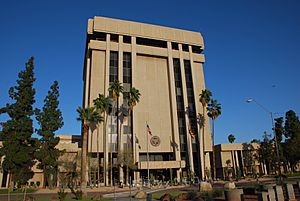 Arizona Boards and Commissions Include

All content from Kiddle encyclopedia articles (including the article images and facts) can be freely used under Attribution-ShareAlike license, unless stated otherwise. Cite this article:
Government of Arizona Facts for Kids. Kiddle Encyclopedia.