Government of Dallas facts for kids

The government in Dallas, Texas is primarily vested in the Dallas City Council, Mayor, and City Manager. There is also the Dallas Police Department, Dallas Fire-Rescue, and the Dallas municipal courts. In the 2006–2007 fiscal year, the city's total budget was $2.3 billion. 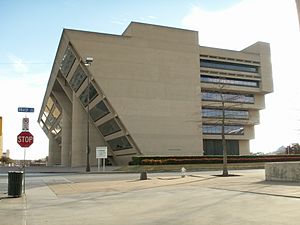 The city uses a council-manager government with Mike Rawlings serving as mayor, T.C. Broadnax serving as city manager, and 14 council members serving as representatives to the 14 council districts in the city. This organizational structure was recently contested by some in favor of a strong-mayor city charter only to be rejected by Dallas voters. 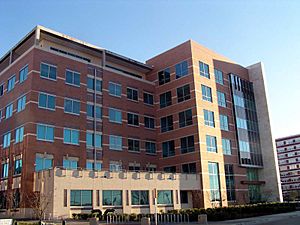 The Dallas Police Department headquarters in the Cedars neighborhood.

Policing in Dallas is provided predominantly by the Dallas Police Department, which has around 3,500 officers. The Dallas chief of police is David Brown (effective May 5, 2010). The Police Headquarters are located in the Cedars neighborhood of South Dallas.

The city of Dallas is protected 24/7, 365 by the 1,670 paid, full-time firefighters of the city of Dallas Fire-Rescue Department (DFD), providing both fire protection and emergency medical service to the city. The Dallas Fire-Rescue Department operates out of 57 Fire Stations in 2 Divisions of 9 Battalions, located throughout the city, and maintain and operate a fire apparatus fleet of 57 Engines, 21 Trucks, 40 Rescues, 3 Peak Demand Rescues, 1 Haz-Mat. Unit, 2 Haz-Mat. Teams, 2 Urban Search and Rescue Units, 9 Brush/Booster Units, 1 Marine Unit (based on Lake Ray Hubbard), 7 smaller Fireboats, 1 Swift Water Rescue Unit, and numerous other special, support, and reserve units. All DFD Paramedics are Firefighters, but not all Firefighters are Paramedics; but are trained to at least EMT-Basic. EMT-Paramedics and EMT-B's are trained through the University of Texas Southwestern Medical Center at Dallas. The department also operates the Dallas Firefighter's Museum at Dallas' oldest remaining fire station, built in 1907, along Parry Avenue near Fair Park. In addition, the department operates in mutual aid agreements with several surrounding municipalities.

In 1995, the Dallas Fire Department Training Academy (now the Chief Dodd Miller Training Academy) began to host firefighter recruits from other Metroplex municipalities in its 22-week basic firefighter training school, effectively becoming a regional training center. The Academy is reverently known as "The Drill Tower" by instructors and graduates, referring to the facility's most taxing structure/activity, a six story tower whose staircase is routinely climbed three times in rapid succession by recruits in full gear and high-rise hose packs.

All content from Kiddle encyclopedia articles (including the article images and facts) can be freely used under Attribution-ShareAlike license, unless stated otherwise. Cite this article:
Government of Dallas Facts for Kids. Kiddle Encyclopedia.