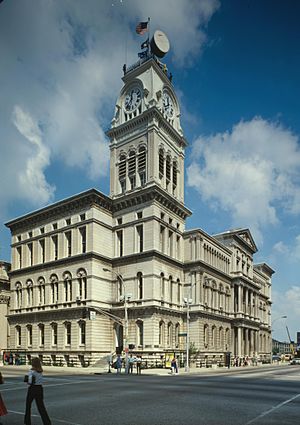 Louisville City Hall in downtown, built 1870-1873, is a blend of Italianate styles characteristic of Neo-Renaissance. It houses the offices and chambers of the Louisville Metro Council.

The second and current Metro Mayor is Greg Fischer (D), who entered office on January 3, 2011. The Metro Council consists of twenty-six seats, corresponding to single-member districts apportioned by population throughout the county. All of the seats are for four-year terms. Using a staggered process, half (thirteen) of the seats are reelected every two years. The council is chaired by a Council President, currently David Yates (D), who is elected by the council members annually. Democrats currently have a 65.4% (17 to 9 seat) majority on the council.

Before merger, under the Kentucky Constitution and statutory law, Louisville was designated as a first-class city in regard to local laws affecting public safety, alcohol beverage control, revenue options, and various other matters. As of 2014, it is the only such designated city in the state.

The Official Seal of the City of Louisville, no longer used following the merger, reflected its history and heritage: the fleur-de-lis represented French aid given during the Revolutionary War, and the thirteen stars signified the original British colonies. The new Seal of Louisville Metro retains the fleur-de-lis and has two stars, representing the city and the county.

The first semblance of local government came shortly after the settlement began. This was originally considered part of Virginia. In 1779, pioneering founders elected five men as "trustees". In 1780 the town was formerly chartered and the Virginia legislature provided for local government by nine legislature-appointed trustees. When Kentucky became a state in 1792, the Kentucky legislature took over the appointments.

Trustees did not have to live in Louisville until a 1795 law change. In 1797 citizens were given home rule and the privilege of electing trustees. Most important decisions were made at the state level, and the trustees were administrators rather than legislators.

When Louisville was incorporated as Kentucky's first city in 1828, it gained greater autonomy. A ten-member "Common Council" was founded, to be headed by a mayor. In 1851 the city was given a new charter, keeping the Common Council as a "lower house" to the Board of Aldermen, an "upper house" of the city's legislative power. In 1929 the larger but less prestigious Common Council was eliminated. This legislative system continued until City-County Merger.

The 26-seat Louisville Metro Council was formally established in January 2003 upon the merger of the former City of Louisville with Jefferson County. It replaced both the city's Board of Aldermen and the county's Fiscal Court (three county commissioners).

The first election under the Act of Incorporation took place on the first Monday in March 1828. All free white males who had lived in the city for at least six months prior to the election could vote. Mayors were not elected directly in the beginning. The two top vote-getters were referred to the Governor, who selected the mayor from the two, with senate approval. The early mayor was relatively weak, acting mostly as a Justice of the Peace, serving a one-year term, and lacking a vote on the City Council except to break ties.

A change to the charter in 1838 allowed for direct election of a mayor, extended the term to three years, and prevented incumbents from running for re-election. The term was reduced to two years from 1851 to 1870, then returned to three. In 1894 the Kentucky Legislature set the term at four years.

In the early 20th century, corruption and political machines were rampant, causing mayors of both parties to be removed from office by courts. All legislative power was given to the Board of Aldermen in 1929. Disenchantment within the African American community with the pace of civil rights issues led a shift from Democrats to progressive Republicans in the 1921, 1929 and especially the 1961 mayoral elections. (Louisville never did withhold the voting franchise from African Americans, despite its "southern" image.) Mayoral term limits were set at three in 1986.

On January 6, 2003, the city of Louisville and Jefferson County governments merged to form one Metro Government and the new office Mayor of Louisville Metro.

All content from Kiddle encyclopedia articles (including the article images and facts) can be freely used under Attribution-ShareAlike license, unless stated otherwise. Cite this article:
Government of Louisville, Kentucky Facts for Kids. Kiddle Encyclopedia.