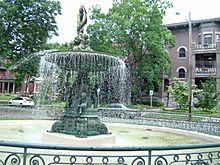 This is a list of official neighborhoods in Louisville, Kentucky. Like many older American cities, Louisville has well-defined neighborhoods, many with well over a century of history as a neighborhood.

The oldest neighborhoods are the riverside areas of Downtown and Portland (initially a separate settlement), representing the early role of the river as the most important form of commerce and transportation. As the city expanded, peripheral neighborhoods like Butchertown, Phoenix Hill, Russell, Shelby Park, Smoketown and others were developed to house and employ the growing population.

The arrival of the streetcar allowed suburbs to be built further out, such as Beechmont, Belknap, Old Louisville, Shawnee and the Highlands. An interurban rail line in the early 1900s led to communities east of Louisville such as Anchorage and Glenview becoming year-round homes for the rich. Some of Louisville's very rich also moved to mansions along Alta Vista road, in today's Cherokee-Seneca neighborhood.

Percentage of housing units built before 1940. Dark green represents a 53% to 83% concentration, and is seen in the Old Louisville, Highlands, Crescent Hill, Portland and Butchertown neighborhoods. A 30% to 52% concentration (pea green) can be found throughout many other areas inside I-264.

Other unincorporated places include:

Some attractions and areas in Louisville are officially designated as neighborhoods.

All content from Kiddle encyclopedia articles (including the article images and facts) can be freely used under Attribution-ShareAlike license, unless stated otherwise. Cite this article:
Neighborhoods in Louisville, Kentucky Facts for Kids. Kiddle Encyclopedia.