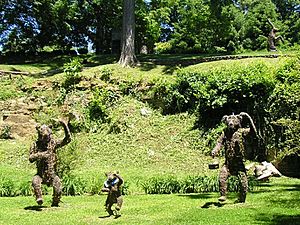 Mockingbird Valley is a home rule-class city in Jefferson County, Kentucky, United States. Since incorporation, there has been some interest in making it a historic preservation district, largely to prevent unwanted development. The population was 167 at the 2010 census. It has the highest per capita income of any location in Kentucky and the tenth-highest of any location in the United States.

Located directly to the east of Louisville along the Ohio River, Mockingbird Valley is frequently referred to as a "country enclave" and is noted for its rural feel. It is located on river bluffs and rolling hills, with large homes set back from the road, heavy tree density, bridges and walls using traditional local materials, as well as undisturbed rock outcroppings. One-third of the roads are privately owned, and the entire city is zoned residential except for a small commercial parking lot.

The first house, Rock Hill, was built in 1840 near River Road and still remains. Although it was initially agricultural, wealthy Louisvillians eventually began building summer homes in Mockingbird Valley, starting with Atilla Cox in 1905 (nearby Cox Park is named for his wife Carrie). An interurban railroad soon allowed for commuting to Downtown Louisville, and the first year-round house was built by Stuart English Duncan in 1908. Planned subdivisions were soon built in the area: the Jarvis addition in 1912, Green Hills in 1924, and Overbrook in 1929. It incorporated as a city in 1940. Development has continued slowly as late as 2006, with a final subdivision, Mockingbird Valley River Bluff, being built on 15 lots covering 54 acres (220,000 m2). The city's history is roughly similar to that of Glenview and Anchorage, two other eastern Jefferson county cities.

The Louisville Country Club is located near Mockingbird Valley, built in 1905 and designed by Walter Travis. In 1999, it was one of several private clubs named in a discrimination lawsuit and was eventually forced to turn over its membership records, though no investigation was ever conducted by the state Human Rights Commission. It admitted its first black member in February 2006.

There were 74 households, out of which 29.7% had children under the age of 18 living with them, 77.0% were married couples living together, 2.7% had a female householder with no husband present, and 20.3% were non-families. 18.9% of all households were made up of individuals, and 16.2% had someone living alone who was 65 years of age or older. The average household size was 2.57 and the average family size was 2.95.

All content from Kiddle encyclopedia articles (including the article images and facts) can be freely used under Attribution-ShareAlike license, unless stated otherwise. Cite this article:
Mockingbird Valley, Kentucky Facts for Kids. Kiddle Encyclopedia.