Anchorage is a home rule-class city in eastern Jefferson County, Kentucky, United States. The population was 2,264 at the 2000 census. It is one of the wealthiest cities in Kentucky, and one of the more affluent suburbs of Louisville. 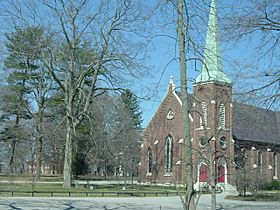 The land that is now Anchorage was a part of Isaac Hite's 1773 land grant, which awarded most of the land in today's Jefferson County to officers in the Virginia militia, in exchange for their service in the French and Indian War. Early maps refer to the area as Hite's Mill and it has also been known as Hobbs Station. Part of his original grant now makes up the grounds of Central State Hospital and E. P. "Tom" Sawyer State Park.

The nautical name is a bit odd, considering the city is over twelve miles from the Ohio River. The origin is The Anchorage, the estate of riverboat captain and early resident James W. Goslee, and was chosen to honor him when the city incorporated in 1878, three years after his death. Tradition says that an anchor hanging inside the rim of a locomotive wheel at the center of town was taken by Goslee from his ship, the Matamora.

The Louisville and Frankfort Railroad (later purchased by the Louisville & Nashville Railroad) was built through the area in 1849. The development of an interurban rail line in 1901 allowed faster travel between Anchorage and Louisville, as well as other towns in the area.

The heavily shaded city, with temperatures often noticeably cooler than in Downtown Louisville, became a popular location for summer homes for wealthy Louisvillians. One such resident was brewing magnate Isaac Wolfe Bernheim, still remembered locally for his philanthropy. In 1914, Bernheim commissioned the firm of Frederick Law Olmsted to design a plan for Anchorage, which would incorporate stone bridges and triangle intersections, similar to Olmsted's plans for Louisville's park system. 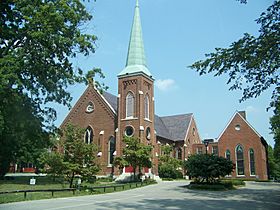 The city has long been known as home of some of the area's wealthiest citizens, though the large old estates have mostly been divided up and many new, still upscale, houses have been built in the area, especially since 1977. Part of the city is designated as the Anchorage Historic District, which was listed on the National Register of Historic Places in 1982.

Papa John's Pizza founder John Schnatter is a resident and owns about 6% of the land in Anchorage, including much of the city center. He restored an interurban rail station, three historic buildings and built a fourth in a similar style in the city's center, with plans to build a bank, an upscale restaurant, and a hiking trail, which opened as the Anchorage Trail in June 2008. In an interview, he told the Courier-Journal that his goal was purely to "preserve the city's character".

There were 729 households out of which 52.4% had children under the age of 18 living with them, 81.9% were married couples living together, 3.7% had a female householder with no husband present, and 11.7% were non-families. 10.6% of all households were made up of individuals and 4.8% had someone living alone who was 65 years of age or older. The average household size was 3.09 and the average family size was 3.33. 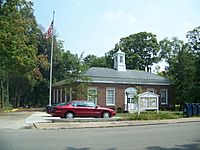 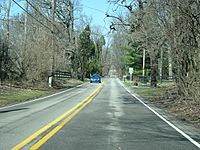 The climate in this area is characterized by hot, humid summers and generally mild to cool winters. According to the Köppen Climate Classification system, Anchorage has a humid subtropical climate, abbreviated "Cfa" on climate maps.

All content from Kiddle encyclopedia articles (including the article images and facts) can be freely used under Attribution-ShareAlike license, unless stated otherwise. Cite this article:
Anchorage, Kentucky Facts for Kids. Kiddle Encyclopedia.