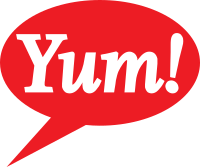 Yum! Brands, Inc., or Yum, are an American based corporation which licenses KFC, Pizza Hut and the Taco Bell restaurants. Before 2011, they also owned the Long John Silver's franchise. The company is based in Louisville, Kentucky. It started on October 7, 1997 as the Tricon Global Restaurants, Inc., which in turn was an independent company and spinoff of PepsiCo. Because of its previous relationship with PepsiCo, this company has a lifetime contract to Pepsi.

All content from Kiddle encyclopedia articles (including the article images and facts) can be freely used under Attribution-ShareAlike license, unless stated otherwise. Cite this article:
Yum! Brands Facts for Kids. Kiddle Encyclopedia.