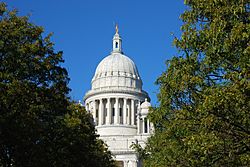 The State House in Providence is the seat of power for the state, and is often referred to as "Smith Hill".

The executive authority is vested in the Governor, typically through various directors and commissioners. The Lieutenant Governor, though nominally in the Executive Branch, is a largely ceremonial position. The Governor and Lieutenant Governor are elected on separate tickets by the electorate of Rhode Island. The Governor's offices are located in the State House. Rhode Island is one of the few states that lacks a governor's mansion.

Rhode Island has numerous departments and agencies. The major ones are:

All content from Kiddle encyclopedia articles (including the article images and facts) can be freely used under Attribution-ShareAlike license, unless stated otherwise. Cite this article:
Government of Rhode Island Facts for Kids. Kiddle Encyclopedia.