The Governor Stephen Hopkins House is a museum and National Historic Landmark at 15 Hopkins Street in Providence, Rhode Island. The house was the home of Stephen Hopkins—a governor of Rhode Island and signatory of the Declaration of Independence—as well at least six of his slaves. 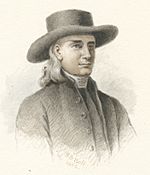 The Stephen Hopkins House is an L-shaped, 2½-story, wood-framed structure whose main block was built in 1742–43 for Hopkins, with an attached two-story ell whose first floor dates to 1707. The main block is four bays wide and two deep, with the main entrance in the second bay from the left. This entry is a 20th-century alteration; the original main entrance was through a doorway on the west side of the ell.

The interior of the main block has the main parlor on the right and Governor Hopkins' study on the left, flanking a central hallway with stair. Behind the parlor is a keeping room, with a small bedchamber behind the study. There are five bedrooms on the second floor, two with fireplaces. The downstairs fireplace mantels are paneled, with the one in the parlor slightly more elaborate.

The 1707 house was purchased by Stephen Hopkins in 1742 and enlarged into its present size. It served as his home until his death in 1785. During these years, he served in the colonial assembly, as a justice (first associate, then chief) of the colonial high court, and as governor of the Colony of Rhode Island from 1755 to 1757. The house is the only significant structure associated with Hopkins' life.

George Washington visited the house on April 5, 1776 while traveling through Providence on his way to take command of the Continental Army in Boston. Washington was entertained by Hopkins' daughter, as Hopkins was in Philadelphia attending the Continental Congress at the time.

In 2011, a room on the building's second floor, above the kitchen was tentatively identified as the living quarters of Hopkin's slaves.

In the late 1920s, the house was carefully restored by Norman Isham. It is now owned and managed by The National Society of the Colonial Dames of America and is a museum open to the public. It was listed on the National Register of Historic Places in 1970, and declared a National Historic Landmark in 1978.

All content from Kiddle encyclopedia articles (including the article images and facts) can be freely used under Attribution-ShareAlike license, unless stated otherwise. Cite this article:
Governor Stephen Hopkins House Facts for Kids. Kiddle Encyclopedia.