Grand Lake Stream is a plantation in Washington County, Maine, United States. The population was 109 at the 2010 census.

Grand Lake Stream, the town is named after the stream that flows through the town, which is notable for its excellent landlocked salmon fishery and a fishing tradition that dates to the middle of the 19th century. It also has a long, local tradition of hand-built wooden canoes, ideal for navigating the waters of nearby West Grand Lake.

While the year-round population of Grand Lake Stream is relatively small, there are many visitors in the spring, summer and fall for fishing, hunting, and general relaxation purpose. There are a number of lodges, cabins, and guiding services available. There is also a very active local land trust based in the middle of town, which owns and manages a large portion of the nearby forests and wetlands. Each summer, Grand Lake Stream is also the site of a meeting of prominent American economists. 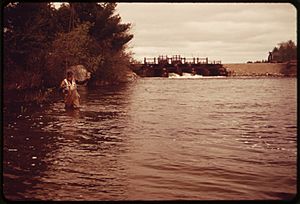 Fly fishing on Grand Lake Stream in the 1970s

There were 76 households, out of which 14.5% had children under the age of 18 living with them, 56.6% were married couples living together, 6.6% had a female householder with no husband present, and 35.5% were non-families. 31.6% of all households were made up of individuals, and 17.1% had someone living alone who was 65 years of age or older. The average household size was 1.97 and the average family size was 2.43.

All content from Kiddle encyclopedia articles (including the article images and facts) can be freely used under Attribution-ShareAlike license, unless stated otherwise. Cite this article:
Grand Lake Stream, Maine Facts for Kids. Kiddle Encyclopedia.