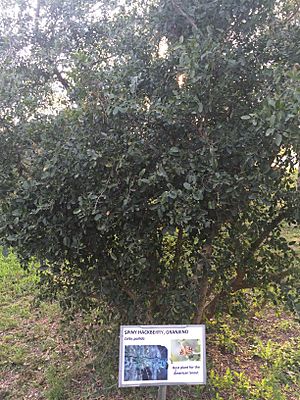 Granjeno is a city in Hidalgo County, Texas, United States. The population was 293 at the 2010 census. The city sits on the banks of the Rio Grande, near the border with Mexico. Its name comes from the granjeno tree (Celtis pallida) or spiny hackberry.

Founded in the late 18th century, Granjeno has a history that predates Texas statehood. Granjeno Cemetery was established in 1872 with burials from both sides of the Rio Grande. By the mid-1930s, the community consisted of several dwellings. A church and school were established in Granjeno by 1948. During the 1960s, growth in the community was stimulated by the development of a colonia. The population was estimated at 545 in 1976. Ten years later, that figure has decreased to 450. On January 26, 1993, Granjeno was incorporated as a city. The population was just over 300 in 2000. Mayor (Yvette Cabrera) and two commissioners (Bianca Sinai De Rueda and Mary D. Garza)

Granjeno is adjacent to the Anzalduas County Park, which is known for its moss-covered trees. Construction on the nearby Anzalduas International Bridge began in mid-2007 and the bridge became operational in late 2009.

El Granjeno Cemetery (Texas Historic Landmark) was established in 1872 with the burial of Don Antonio Garza. His brother, Don Juan Garza Escheverria, donated the surrounding land for use by the communities of El Granjeno and nearby Madero. A native of Reynosa, Mexico, Don Juan (B. 1854) is buried here, along with many of his descendants. It should be noted that specific instructions were spelled out in historic documents that the rear of the cemetery was to be reserved only for the burial of direct descendants of Don Juan Garza Escheverria. However, in recent years, non-descendants have been buried in that designated area. It is uncertain whether family members will contest this violation, and if so, what that means for the individuals interred in the Garza Escheverria family plot. Also interred here are veterans of the Civil War, World War I and the Vietnam War. El Granjeno Cemetery has served families on both sides of the Rio Grande and is a reflection of the history of the area's small working villages.

Granjeno is part of the McAllen–Edinburg–Mission and Reynosa–McAllen metropolitan areas.

There were 93 households, of which 46.2% had children under the age of 18 living with them, 57.0% were married couples living together, 21.5% had a female householder with no husband present, and 17.2% were non-families. 17.2% of all households were made up of individuals, and 11.8% had someone living alone who was 65 years of age or older. The average household size was 3.37 and the average family size was 3.81.

Public education in the city of Granjeno is provided by the Hidalgo Independent School District. It is zoned to Salinas Elementary School, Ida Diaz Jr. High School, and Hidalgo Early College High School.

All content from Kiddle encyclopedia articles (including the article images and facts) can be freely used under Attribution-ShareAlike license, unless stated otherwise. Cite this article:
Granjeno, Texas Facts for Kids. Kiddle Encyclopedia.