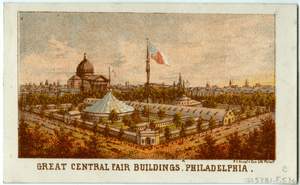 This is a lithograph of the Great Central Fair. It was made in 1864 by James Fuller Queen

The Great Central Fair was a fair that happened in June 1864. It took place in Philadelphia, Pennsylvania. It was held to raise funds for the United States Sanitary Commission.

The Great Central Fair took place from June 7 until June 28, 1864. It happened in a park called Logan Circle in Philadelphia. Other sanitary fairs took place in Chicago, Cincinnati, and New York City. The people in Philadelphia thought they should do one to raise money for the United States Sanitary Commission.

Two architects named Samuel Honeyman Kneass and William Stickland designed the buildings for the fair. The biggest building was 200,000 square feet in size. Inside, visitors could visit different theme areas. The areas included information about New Jersey, Delaware, sewing, corn, weapons, art and children. There was also a restaurant.

Abraham Lincoln visited the fair on June 16. He donated 48 copies of his Emancipation Proclamation. They were sold for $10 each. He autographed all of them. The festival raised over $1 million.

All content from Kiddle encyclopedia articles (including the article images and facts) can be freely used under Attribution-ShareAlike license, unless stated otherwise. Cite this article:
Great Central Fair Facts for Kids. Kiddle Encyclopedia.