The Great Southern Rail Trail is a 68-kilometre rail trail from Leongatha to Welshpool in South Gippsland, Victoria, Australia. This mostly flat or gently undulating trail goes through lush dairy farmland, areas of remnant bush and lowland scrub. It climbs from the foothills of Fish Creek up past Mount Hoddle and then down a steep descent through dense forest out into magnificent views of Wilsons Promontory and Corner Inlet, continuing on to Foster. before ending at Welshpool.

The trail is well maintained with a surface of compacted gravel. Koalas Wombats and wallabies can often be seen from the trail particularly in the early mornings and evenings.

The 10 km Toora to Welshpool section was opened on 7 February 2015.

A section from Koonwarra to Minns road was opened in March 2016 incorporating what were three very dilapidated wooden trestle bridges. This section replaces what was a three kilometer diversion to the nearby South Gippsland Highway. The section provides an unbroken trail from Leongatha to Welshpool. Users can then link to a 6 km pathway to Port Welshpool and its picturesque Long Jetty.

The trail is being progressively extended, and may eventually reach Yarram.

The original South Gippsland line opened in 1892, joining Dandenong to Port Albert, with branch line to Woodside, Strzelecki, Outtrim and Wonthaggi. The railway was important for the settlement and development of the area, particularly providing transport for forestry and dairy products to Melbourne.

The line was closed to all rail traffic on 30 June 1992, a century after opening, when rail freight services to the Esso Mobil Barry Beach Marine Terminal, situated on Corner Inlet, ceased operation. Almost two weeks prior, on 17 June 1992, superphosphate rail freight services along the line to Buffalo ceased, which was the last 'mixed goods service' in the region and a distinctive feature of the line during its existence.

The line beyond Leongatha, to Yarram and Barry Beach, was dismantled in stages until 14 December 1994, when a V/Line 'rail recovery' train removed the last of the tracks, which were subsequently reused for the Melbourne to Adelaide railway line gauge standardisation project throughout 1995. The same day also saw the closure of the South Gippsland railway line from Nyora to Leongatha, but, two weeks later, that section of the line was reopened by the South Gippsland Railway tourist railway, which operated heritage rail services until December 2015.

Leongatha is located in the foothills of South Gippsland's Strzelecki Ranges with a population around 5,000. The trail passes through wide-open spaces of lush dairy country before entering teatree and eucalypt bushland near Koonwarra.

Incorporating a new section of trail covering three old wooden trestle bridges. The path winds its way around hills and over river flats with wonderful views of the local area.

This is a fairly rough section of the track, and there is an old timber bridge alongside the new bridge over the Tarwin River near Meeniyan.

Meeniyan to Foster, via Buffalo and Fish Creek (32km)

This section of the trail has a fine gravel surface and passes through bushland, swamp scrub and lowland forest. There is abundant local wildlife; kangaroos, wallabies and bird life thrive in this area. At the foothills of the Hoddle Range, there are steeper parts of the trail and a number of cuttings and embankments.

The quirky town of Fish Creek has a strong arts scene and plenty of options to eat and restock supplies. There is a climb from Fish Creek to Hoddle Summit where there are views over Corner Inlet and Wilsons Promontory from the peak.

Foster is a small regional town but caters well for visitors and there are plenty of accommodation options. 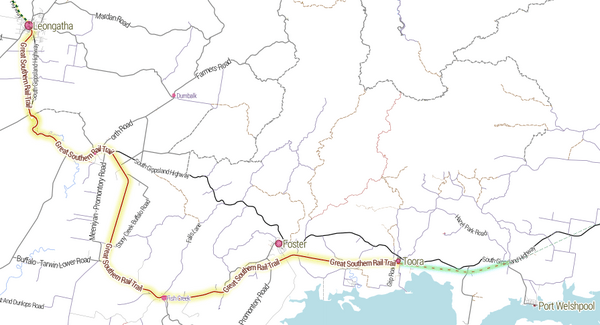 All content from Kiddle encyclopedia articles (including the article images and facts) can be freely used under Attribution-ShareAlike license, unless stated otherwise. Cite this article:
Great Southern Rail Trail Facts for Kids. Kiddle Encyclopedia.