The green oriole or Australasian yellow oriole, (Oriolus flavocinctus) is an inconspicuous inhabitant of lush tropical vegetation throughout Australia and New Guinea.

Alternate names for the green oriole include the Australian yellow oriole, yellow oriole and yellow-bellied oriole.

They are often difficult to locate, as their yellow-green plumage blends with the foliage and only their deep bubbling musical calls can be heard. They are nevertheless common in suitable habitat: rainforests, mangroves, thickets along watercourses, swamps, and lush gardens. 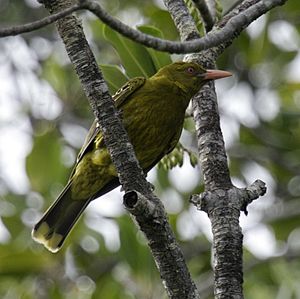 Breeding takes place during the wet season (October to March). A neat, deep cup is constructed from strips of bark and vines, lined with rootlets, and slung between leafy branches, usually 5 to 15 metres up. They typically lay 2 eggs.

Green orioles forage slowly and methodically through the mid and upper strata of dense forests, taking fruit in the main. Typically alone or in pairs, they sometimes form small flocks in the non-breeding season.

All content from Kiddle encyclopedia articles (including the article images and facts) can be freely used under Attribution-ShareAlike license, unless stated otherwise. Cite this article:
Green oriole Facts for Kids. Kiddle Encyclopedia.