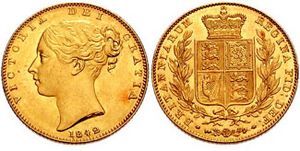 1842 "shield back" sovereign: replaced now by a piece of paper

Silver coins were widely circulated in Canada (until 1968) and in the United States (until 1964 for dimes (ten cents) and quarters and 1970 for half dollars). However, these countries made their coins cheaper to make by switching to cheaper metals. The silver coins disappeared from circulation as people kept them for the value of their metal. The new coins had value as coins, but less value as metal.

The same process happens now with the copper content of coins such as the pre-1997 Canadian penny (one cent), the pre-1982 United States penny and the pre-1992 UK copper pennies and two pence. This also occurred even with coins made of less expensive metals such as steel in India.

All content from Kiddle encyclopedia articles (including the article images and facts) can be freely used under Attribution-ShareAlike license, unless stated otherwise. Cite this article:
Gresham's law Facts for Kids. Kiddle Encyclopedia.