The Greystone Mansion, also known as the Doheny Mansion, is a Tudor Revival mansion on a landscaped estate with distinctive formal English gardens, located in Trousdale Estates of Beverly Hills, California, United States. Architect Gordon Kaufmann designed the residence and ancillary structures, and construction was completed in 1928. The estate was a gift from oil tycoon Edward L. Doheny to his son, Edward "Ned" Doheny, Jr., and his family. Following the purchase of the estate by the City of Beverly Hills in 1965, the property became a city park in 1971, and was subsequently added to the National Register of Historic Places in 1976 as Doheny Estate/Greystone. The house and grounds are often used in filmmaking and television production. The house's descending staircase is one of the most famous sets in Hollywood. 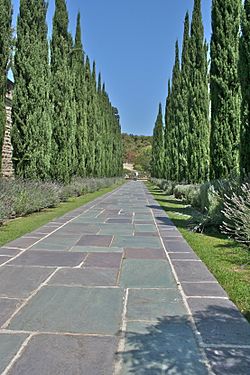 Landscape allée in the terraced gardens of Greystone.

Greystone is now a public park, and is also used as a location for special events, including the Beverly Hills Flower & Garden Festival. The estate is popular as a filming location due to its beauty, manicured grounds and Beverly Hills location. Some productions contribute to the upkeep and renovation of the mansion. The 2007 film There Will Be Blood, loosely based on the life of Edward Doheny via the Upton Sinclair book Oil!, renovated the downstairs two-lane bowling alley to include it in the film.

In addition to the numerous events that take place at Greystone, the mansion plays host each year to Catskills West, a theater arts and drama camp run by Beverly Hills Parks and Recreation, from mid June to early August. The camp presents a play in the pool area twice during the summer. The mansion is also used for performances of the play The Manor, written by Kathrine Bates, directed by Beverly Olevin, and produced by Theatre 40 of Beverly Hills. The Manor takes place in a number of different rooms of the mansion. The audience is separated at certain times during the play to watch some scenes in a different order. The plot of The Manor is a fictionalized account of the Doheny family, involving Doheny's involvement in the Teapot Dome scandal and his son's murder. The Manor has been performed every year at Greystone Mansion since 2002; 2020 marked a run of 18 consecutive years, making it Los Angeles' longest-running play.

Greystone Mansion is also the location of "The Annual Hollywood Ball," where hundreds of celebrities gather each year for a grand fashion show, dinner, and auction to raise money for charity. The million-dollar gathering also includes live performances by leading artists. Since 2010, an annual Concours d'Elegance car show has been held at the Greystone Mansion.

All content from Kiddle encyclopedia articles (including the article images and facts) can be freely used under Attribution-ShareAlike license, unless stated otherwise. Cite this article:
Greystone Mansion Facts for Kids. Kiddle Encyclopedia.