Griffin House is a house built in 1827 by Englishmen in Ancaster. It was purchased, along with 50 acres of farmland, by Enerals Griffin and his wife Priscilla in 1834. The Griffins were enslaved in their early lives, but self-liberated by escaping to Canada in the early 1800s. The Griffins were some of the first Black Settlers in the area, and the site remains an important part of Black history in Canada. . It offers Underground Railroad tours and history-related programs.

Griffin House was designated as a National Historic Site of Canada in 2008. The house is a rare surviving example of a four-room house typical in Upper Canada in the early 19th century. It was owned by Enerals Griffin, an African American slave from Virginia who escaped to Canada in 1834. 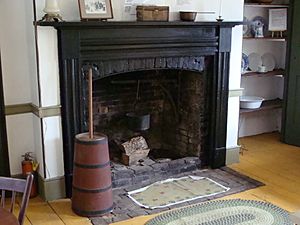 All content from Kiddle encyclopedia articles (including the article images and facts) can be freely used under Attribution-ShareAlike license, unless stated otherwise. Cite this article:
Griffin House (Ancaster, Ontario) Facts for Kids. Kiddle Encyclopedia.