The Grissom Air Museum is a military aviation museum at Grissom Air Reserve Base near Peru, Indiana with over twenty aircraft on display.

The museum's origins date to 1981, when the Grissom Air Force Base Heritage Museum Foundation was formed by John Crume and other military veterans to preserve the aircraft located at the base. The Grissom Air Museum was started in 1987 when aircraft were moved to an area outside the northern main gate from a location on base.

The indoor museum was completed in 1991. In 1995, the museum was transferred from the United States Air Force Museum system to the Indiana State Museum and Historic Sites system. The museum obtained two "new-in-box" Quonset huts for additional display space in 1997. Then, in 2010, the museum was dropped from the latter system.

In 2015, the museum's B-17 was disassembled and transferred to the Museum of Aviation for restoration. 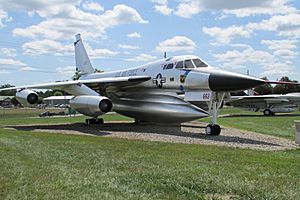 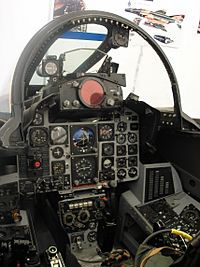 Interior of an F-4 Phantom

The cabin of a HH-1K and the cockpit of a F-4C are on display inside the museum building.

The entire Grissom Air Reserve Base and aircraft display are visible from the top of the five-story Cold War-era Observation Tower.

All content from Kiddle encyclopedia articles (including the article images and facts) can be freely used under Attribution-ShareAlike license, unless stated otherwise. Cite this article:
Grissom Air Museum Facts for Kids. Kiddle Encyclopedia.