Grunwald (German: Grünfelde, green field; Lithuanian: Žalgiris) is a village in the administrative district of Gmina Grunwald, within Ostróda County, Warmian-Masurian Voivodeship, in northern Poland. It lies approximately 26 kilometres (16 mi) south of Ostróda and 43 km (27 mi) south-west of the regional capital Olsztyn. It is located within the historic region of Masuria. The village has a population of 417.

On July 15, 1410, the Battle of Grunwald was fought near the village, in which Polish–Lithuanian forces commanded by King Władysław II Jagiełło defeated the Teutonic Knights. It was one of the largest battles in medieval Europe and one of the most important and magnificent victories in the history of Poland and Lithuania. The Grunwald Battlefield, listed as a Historic Monument of Poland, is located nearby. Festivities and battle reenactments take place every year on the battle anniversary. 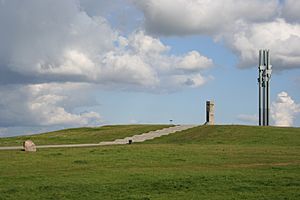 After the battle, the King of Poland, Władysław II Jagiełło, intended to erect a chapel on the battlefield at "loco conflictus nostri ... dicto Grunenvelt". Despite the Polish–Lithuanian victory in the battle and the war, the battle site remained under the control of the Teutonic Order until 1525, although since 1466 under Polish suzerainty as a fief, and they built a chapel dedicated to Mary instead. The village was mentioned in the 15th-century Latin chronicles as Grunenvelt. Chronicler Jan Długosz used the Polish name Grunwald, and that name was used in Polish historiography since.

After the defeat of Nazi Germany in World War II, in accordance to the Potsdam Agreement, the village became part of Poland. A museum and memorial site are located in the fields where the battle was fought, roughly in the middle of a triangle, with Stębark and Łodwigowo.

All content from Kiddle encyclopedia articles (including the article images and facts) can be freely used under Attribution-ShareAlike license, unless stated otherwise. Cite this article:
Grunwald Facts for Kids. Kiddle Encyclopedia.