Gulf of Thailand facts for kids

Map showing the location of the gulf 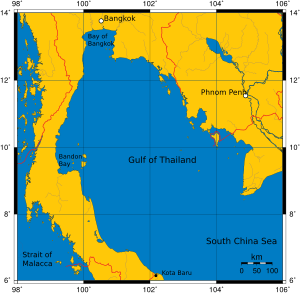 The Gulf of Thailand is a shallow arm of the South China Sea.

The Gulf of Thailand is bordered by Cambodia, Thailand and Vietnam. The northern tip of the gulf is the Bay of Bangkok at the mouth of the Chao Phraya River. The gulf is about 320,000 km². The boundary of the gulf is defined by the line from Cape Bai Bung in southern Vietnam to the city Kota Baru on the Malaysian coast.

The Gulf of Thailand is relatively shallow. Its average depth is 45 m, and the maximum depth only 80 m. This makes water exchange slow. The strong water inflow from the rivers make the Gulf low in salinity (3.05-3.25%) and rich in sediments. The main rivers which empty into the gulf are the Chao Phraya (including its distributary Tha Chin River), Mae Klong and Bang Pakong Rivers at the Bay of Bangkok, and the Tapi River into Bandon Bay in the southwest of the gulf.

The Gulf of Thailand has many coral reefs, and several diving resorts. Due to the tropical warmth of the water, it is popular with tourists. Some of the most important tourist places in the Gulf of Thailand are the islands of Ko Samui and Ko Pha Ngan in Surat Thani province, Pattaya in Chonburi province, Cha-am in Phetchaburi Province, Hua Hin in Prachuap Khiri Khan Province, Ko Samet in Rayong Province,and Ko Chang in Trat Province

All content from Kiddle encyclopedia articles (including the article images and facts) can be freely used under Attribution-ShareAlike license, unless stated otherwise. Cite this article:
Gulf of Thailand Facts for Kids. Kiddle Encyclopedia.