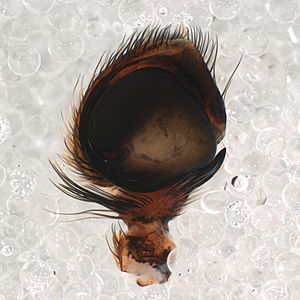 Habronattus mexicanus is a jumping spider species in the genus Habronattus. It is the type species of that genus.

The species was originally named Habrocestum mexicanum by George and Elizabeth Peckham in 1896 but was transferred by them to Pellenes in 1901 and subsequently to Habronattus by Jerzy Prószyński in 1976.

The species was first identified in Mexico. It has also been found across North America, Central America and the Caribbean, including Cuba, Honduras, Jamaica and Texas.

According to the World Spider Catalog, the following are also synonyms:

All content from Kiddle encyclopedia articles (including the article images and facts) can be freely used under Attribution-ShareAlike license, unless stated otherwise. Cite this article:
Habronattus mexicanus Facts for Kids. Kiddle Encyclopedia.