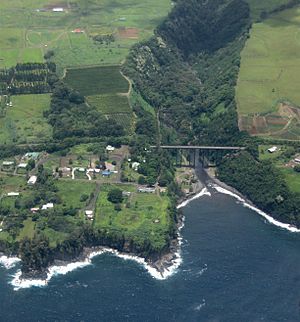 During the 19th century the Hakalau Bay was used to transfer goods and passengers from smaller boats to larger ships. Today, the bay is used mostly by local surfers and fisherman. Hakalau now has a small, day use, county owned park with picnic tables and ocean access for recreational use, located at the bottom of the Hakalau gulch.

Located nearby is the World Botanical Gardens (WBGI).

Origins and early history of Hakalau

As with most Hawaii, immigrants from China and elsewhere populated the Hawaiian Islands. The initial Chinese immigrants to Hawaii Island were Punti and landed at Kohala on Hawaii Island. One immigrant in particular, Lau Sung Iu, was Hakka ("the guest people" of China) and came to Hawaii Island in this manner. He was ethnic northern Chinese, tall for his people at around 6 feet. In China, he was an officer in the Chinese army, involved in one of the many conflicts involving the Qing Dynasty. He and another were smuggling powder across the Yalu River when they were discovered. He was shot and wounded but succeeded in escaping by hiding among the reeds in the river. He was later picked up by an American ship and did odd jobs aboard the vessel for passage. He made his way to Hawaii via Hong Kong. Being Hakka and tall, he attracted attention among the shorter and linguistically different Punti, who had also immigrated to Hawaii Island. He later became a merchant and opened a store outside of Hilo along the Hamakua Coast. The area in which the store was located became a gathering or stopping point along the Hamakua Coast for travelers. The store, and later the area, became known as Hakalau, named after the tall Hakka proprietor and his actual name of Lau Sung Iu, owner of the general store. Thus, the name Hakalau.

All content from Kiddle encyclopedia articles (including the article images and facts) can be freely used under Attribution-ShareAlike license, unless stated otherwise. Cite this article:
Hakalau, Hawaii Facts for Kids. Kiddle Encyclopedia.