Halcyon is an unincorporated community located on the West Fork of Big Harts Creek in Logan and Lincoln counties, West Virginia, United States.

During the Civil War, local families supported the Confederacy.

The area hosted one minor event of the Lincoln County feud in 1889.

Polk's West Virginia State Gazetteer and Business Directory (1923-1924) identified Halcyon as consisting of 100 residents. It was situated 15 miles northwest of Logan, the county seat and banking point, three miles west of Chapmanville, the nearest shipping point, and 50 miles from Huntington. 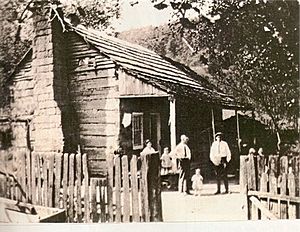 The Halcyon Post Office was established in 1906. Albert Dingess, Jr. served as postmaster from May 3, 1906 until April 20, 1921. Everett Dingess took possession of the office on April 20, 1921, served as acting postmaster from May 11, 1921, and became postmaster on September 21, 1921, holding that position until July 14, 1923. Polk's West Virginia State Gazetteer and Business Directory (1923-1924) identified Dingess as the postmaster and stated that mail was delivered tri-weekly. The post office was discontinued on July 14, 1923, its service transferred to Ferrellsburg in Lincoln County. 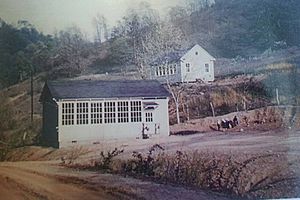 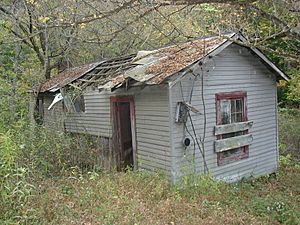 "Punkin Center," located in the bottom between the mouth of Piney and the mouth of Workman Fork, was the location of "good time" houses.

In the early 1920s, a Bryant-Dingess feud occurred in the community.

Electricity arrived to the community in the 1930s.

All content from Kiddle encyclopedia articles (including the article images and facts) can be freely used under Attribution-ShareAlike license, unless stated otherwise. Cite this article:
Halcyon, West Virginia Facts for Kids. Kiddle Encyclopedia.