Halethorpe is an unincorporated community in Baltimore County, Maryland, United States. The community is considered to be a sub-section of Arbutus by the United States Census Bureau. It is bordered by the main portion of Arbutus to the north, Baltimore to the North East, Elkridge to the South West, and Linthicum to the East. It is southeast of the University of Maryland, Baltimore County.

Halethorpe is home to the Engine 5 Fire House, located on the corner of Washington Blvd and Halethorpe Farms Road. 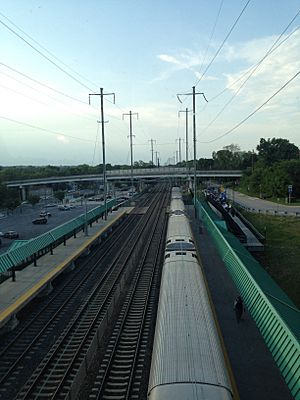 Looking north at a train departing from Halethorpe Station

The Halethorpe community is served by the no. 77 bus line operated by the Maryland Transit Administration.

A stop on the MARC Penn Line on Southwestern Boulevard serves the Halethorpe-Arbutus community. The Maryland Transit Administration and the University of Maryland, Baltimore County provide bus service to the station.

Halethorpe was the site of the Baltimore and Ohio Railroad's 1927 centenary celebration, the Fair of the Iron Horse.

There is a large Alcoa aluminum extrusion plant in Halethorpe that used to be part of Kaiser Aluminum.

The Clipper City Brewing Company, the brewer of Heavy Seas Beer, is located on Hollins Ferry Road in Halethorpe.

All content from Kiddle encyclopedia articles (including the article images and facts) can be freely used under Attribution-ShareAlike license, unless stated otherwise. Cite this article:
Halethorpe, Maryland Facts for Kids. Kiddle Encyclopedia.