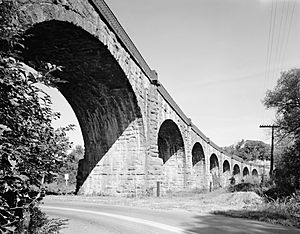 Elkridge is an unincorporated community and census-designated place (CDP) in Howard County, Maryland, United States. The population was 15,593 at the 2010 census. Founded early in the 18th century, Elkridge is located at the confluence of three counties, the other two being Anne Arundel and Baltimore counties.

Elkridge qualifies as the oldest settlement in its present county, when Howard was a part of Anne Arundel County. Its location on the Patapsco River was a key element in its growth. The Maryland General Assembly elected a law to erect a 30-acre (120,000 m2), forty-lot town at the pre-existing settlement of Elkridge Landing to be called "Jansen Town" in 1733. In 1738 an attempt to formalize the town failed with the death of the commissioners before passage. In 1750 a second attempt to formalize the town was attempted around the lands of Phillip Hammond. By comparison, Baltimore Town consisted of only 25 dwellings at that time. A third petition was filed in 1762.

The settlement was founded as a place where planters, who each had a wharf along the river, could bring their tobacco crop to be loaded on English trading ships. Later, Elkridge Landing was built as the seaport dock for the community. In 1755 the Elkridge Furnace was founded at the Elkridge Furnace Complex, a historic iron works located on approximately 16 acres (65,000 m2) and including six remaining buildings of an iron furnace which operated into the 1860s. The millrace that fed water to the furnace was filled in in the 1920s to create the current "Race Road". The Hockley Forge and Mill were created upstream in 1760. In 1781, Lafayette camped light infantry at Elkridge Landing en route to Virginia during the Revolutionary war. In 1825, Jansen Town burned, taking out all of the oldest buildings at the Landing and 9 out of 10 houses in the village. The same year, on October 12, 1825, the Elkridge Landing postal stop was created.

Elkridge has historic churches, including Melville Church on Furnace Avenue. Its original building was the first Methodist church built (1772) and was visited on the circuit rides of Francis Asbury. Saint Augustine Church, on Old Washington Road, was built in 1845 and opened its parochial school in 1870.

Elkridge had a rich history of industries, including pig-iron forging, basket weaving, paper, cotton and grist milling, as well as employment from the B&O Railroad. The Thomas Viaduct, located over Levering Avenue at the entrance to the Patapsco Valley State Park, is the oldest multiple-arched curved stone railroad bridge in the world. Built in 1833, its architect was Benjamin Latrobe, Jr. The B&O first used horse-drawn coaches in relays, hence Relay Station was added. The viaduct also carried the Tom Thumb, and the first telegraph message from Washington, D.C., stating "What hath God wrought?" was wired across.

Elkridge did not escape the Civil War. Union troops guarded the Thomas Viaduct and the thoroughfare to Baltimore with a captured Winans Steam Gun while camping on Lawyers Hill, a community of summer estates built over the years by residents such as Caleb Dorsey ("Belmont"), Baltimore City Supreme Bench Judge George Washington Dobbin ("the Lawn"), Thomas Donaldson ("Edgewood"), John Latrobe ("Fairy-Knowe"), and the Penniman family home ("Wyndhurst"). Some of these families had slaves. 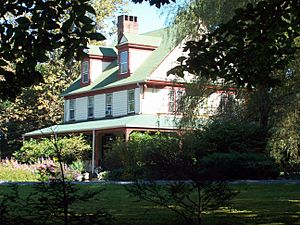 Their estate cottages were built along the top of the Lawyers Hill, including along Old Lawyers Hill Road, on which at one corner stands the Elkridge Assembly Rooms. This community hall, built in 1871, was a neutral meeting place for entertainments for Northern and Southern sympathizers of the neighborhood and owned by them as stockholders. Neighbors did not betray neighbors and each protected others' property from advancing troops. Many homes remain, while others burned and have not been rebuilt, such Fairie Knowe in 1850 and 1900. The Lawyers Hill Historic District was listed on the National Register of Historic Places in 1993.

The Washington Turnpike Road Company built what is now Washington Boulevard between 1796 and 1812, creating a major north–south land route that is now U.S. Route 1. As automobiles became a popular alternative to rail, the corridor became the key road and commercial corridor between Baltimore and Washington. With increased travel speeds, Elkridge was the location of "Dead Man's Curve" near Ducketts Lane. In 1915, bus service was started between Elkridge and the terminal adjacent to the Montgomery Ward Warehouse and Retail Store in Baltimore.

In 1939, the Andrews Brothers opened the first mobile home park in Elkridge. In 1987, Howard County commissioned studies to develop commercial properties that were not detailed in the 1980 general plan. 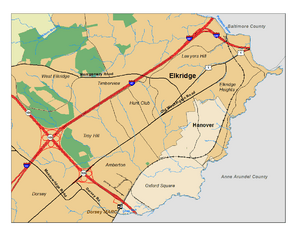 The following neighborhoods and communities are within the Elkridge census-designated place:

Western Elkridge: west of I-95 and north of Maryland Route 100. 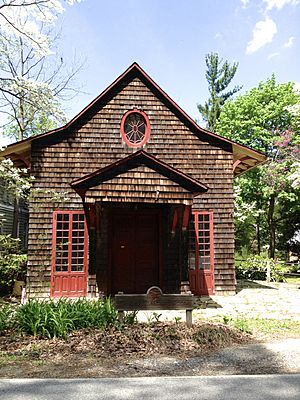 The Elkridge Assembly Rooms in Lawyers Hill was used as a "neighborhood parlor" since the 1870s.

The Elkridge Branch opened in August 1993. The library is set to be replaced with a new building on the same site in 2017, and will be approximately double the current size.

Elkridge is home to a number of small tributaries of the main waterway, the Patapsco River, that are used for recreation. They include: 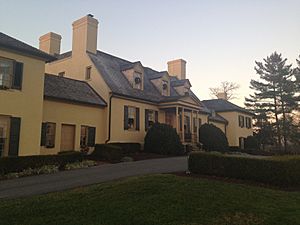 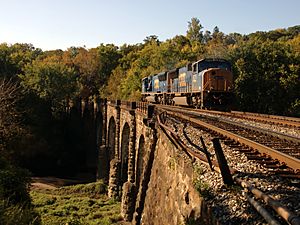 Engines on the Thomas Viaduct

Elkridge's main corridor is defined by Washington Boulevard, a historical road traveled by George Washington and known for "Dead Man's Curve" during early automotive travel. Interstate 95 forms the northwestern edge of the Elkridge census-designated place, and Interstate 895 crosses the northern corner of the community. Interstate 195 passes just east of Elkridge, with access from its Exit 3 with Washington Boulevard. Maryland Route 100 runs through the southern part of Elkridge, providing access to Ellicott City and Glen Burnie. The Baltimore-Washington Parkway travels just to the east of Elkridge, and will eventually include an interchange with Hanover Road, providing another method of travel to Elkridge from the south.

The historic B&O rail line owned by CSX provides the eastern border for most of Elkridge. The combination freight and passenger corridor overrides the water supply for Elkridge and Howard County, which is electronically monitored to detect precursors of explosive failures in the aging system. Water transportation has ceased since decreasing water levels on the Patapsco have made it unnavigable. 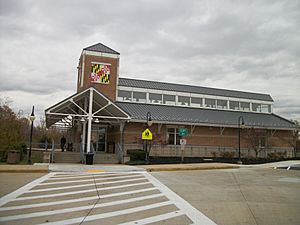 Major north-south routes in Elkridge include:

Major east-west routes in Elkridge include:

All content from Kiddle encyclopedia articles (including the article images and facts) can be freely used under Attribution-ShareAlike license, unless stated otherwise. Cite this article:
Elkridge, Maryland Facts for Kids. Kiddle Encyclopedia.