Glen Burnie is a census-designated place (CDP) in Anne Arundel County, Maryland, United States. It is a suburb of Baltimore. The population of Glen Burnie was 67,639 at the 2010 census.

In 1812, Elias Glenn, a district attorney, established a county seat near what is currently known as Brooklyn Park. He named his property "Glennsburne".

The name was changed to "Glennsbourne Farm", and eventually "Glenburnie", as the property was passed through Glenn's descendants. Records also show the name as "Tracey's Station" and "Myrtle", after local postmaster Samuel Sewell Tracey and one of Tracey's boarders, before the final decision was made.

In 1854, William Wilkins Glenn, Elias Glenn's grandson, incorporated the Curtis Creek Mining, Furnace and Manufacturing Company into his family's property. The business flourished during the 19th century, and with it came several thousand acres of land in northern Anne Arundel County.

Upon the death of William Wilkins Glenn, his son, brother and nephew began to manage the family's business affairs, and Glenburnie became an official state subdivision in 1888. The Glenn family contracted George T. Melvin and Henry S. Mancha to lay out and promote the town. It would not be until 1930 that postmaster Louis J. DeAlba decided two words were better than one, and gave the town a final name change to the current Glen Burnie. 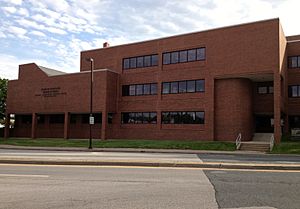 Among the earliest Glen Burnie schools was First Avenue Elementary, built in 1899. The oldest area church is St. Alban's Episcopal, which was built in 1904, with many of its bricks dating back to Marley Chapel, an early Maryland parish from the 1730s. Crain Highway, one of Glen Burnie's main thoroughfares (named after State Senator Robert Crain), opened in 1927 and Ritchie Highway (Maryland Route 2, named for ex-Governor Albert C. Ritchie) followed in 1939. Ritchie Highway carried nearly all Baltimore-area traffic headed for Annapolis and the Chesapeake Bay Bridge until an alternate bypass road, Interstate 97, opened in the 1980s.

Until 1950 the Baltimore and Annapolis Railroad provided passenger and freight service through Glen Burnie from Annapolis to Baltimore; passenger service ended in February 1950 due to increased competition from buses and private automobiles, but freight service continued until Hurricane Agnes did so much damage to a trestle crossing the Severn River in Annapolis that the trestle was condemned for use by trains by the Army Corps of Engineers in the late 1960s. (The trestle remained as a haven for fishermen and crabbers until it was dismantled.) North Glen Burnie is now served by the Baltimore Light Rail system's Cromwell/Glen Burnie station.

Schools and churches were built in the ensuing decades, and construction was completed on Harundale Mall, the first enclosed shopping center east of the Mississippi River, in 1958. It was one of the first shopping centers to be called a "mall" and was developed by James W. Rouse of the Rouse Company (which also developed nearby Columbia, Maryland). The mall was developed in a joint effort with a local real estate developer, Charles Steffey. The original planned location was not on Ritchie Highway but on Crain Highway (the main arterial for Glen Burnie). Charlie Steffey and Jim Rouse negotiated unsuccessfully with the "city fathers" of Glen Burnie, offering to regenerate the (then failing) center of town with their revolutionary concept. The "sticking point" was that the intersection of Crain Highway and Quarterfield Road (the proposed location) habitually flooded in even nominal rainstorms, to the point of cars being up to their doors in the river that ensued.

The "city fathers" decided that the advantage of having the "mall" there was overshadowed by the cost of fixing the storm water situation and declined. As a result, Glen Burnie Mall followed in 1962. Marley Station, another large shopping center, opened in February 1987. The Maryland Motor Vehicle Administration office building employs many people in town. In the 1970s, developers tried to make Glen Burnie more urban by building and funding new projects, projects like Empire Towers in 1974, or Crain Towers in 1990, then with the addition of a Anne Arundel Community College branch in the town center. In 1965, North Arundel Hospital opened as a community hospital, but as it was constantly overflowed with patients, the University of Maryland Medical System bought the hospital in 2000 and renovated it to accommodate more patients and equipment.

Communities that fall under Glen Burnie:

The climate in this area is characterized by hot, humid summers and generally mild to cool winters. According to the Köppen Climate Classification system, Glen Burnie has a humid subtropical climate, abbreviated "Cfa" on climate maps.

The Baltimore–Washington International Airport is directly adjacent to the west of Glen Burnie, providing the city access to domestic and international flights.

As the southern terminus of the Cromwell Branch of the Baltimore Light Rail, Glen Burnie is home to two light rail stops (Ferndale and Cromwell / Glen Burnie. Cromwell Station, located at the intersection of Baltimore-Annapolis Boulevard and Dorsey Road, is equipped with a free park-and-ride for commuters, as well as a bus connection to MTA Route 14 and bike connection to the Baltimore & Annapolis Trail.

The Glen Burnie area is served by the following major roadways:

Glen Burnie is also home to a campus of Anne Arundel Community College.

All content from Kiddle encyclopedia articles (including the article images and facts) can be freely used under Attribution-ShareAlike license, unless stated otherwise. Cite this article:
Glen Burnie, Maryland Facts for Kids. Kiddle Encyclopedia.