Patapsco Valley State Park is a public recreation area extending along 32 miles (51 km) of the Patapsco River south and west of the city of Baltimore, Maryland. The state park encompasses multiple developed areas on over 14,000 acres (5,700 ha) of land. In 2006, it was officially celebrated as Maryland's first state park and is managed by the Maryland Department of Natural Resources.

Formation of the park started with provisions in the Forestry Act of 1906. The completion of Bloede's Dam in 1906 required the implementation of protections to prevent silting from nearby farm erosion. Patapsco Valley State Park was established as Patapsco State Forest Reserve in 1907 to protect the valley's forest and water resources. The first 43 acres were donated by Russell Sage Foundation director John Mark Glenn (1858-1950) from his Hilton estate. In 1912, Maryland delegate Carville Benson promoted expanding the Patapsco Forest Reserve as a park to support his suburban development initiatives. As other sections along the river were added, Patapsco Valley State Park became one of the largest parks in Maryland.

In 1933, the Civilian Conservation Corps opened State Park Project 2 work camps 336 and 356 at the park. CCC workers created recreational facilities and performed tree plantings for erosion control and silt management around the dam from adjacent overworked farms. Keeping the shores and hillsides vegetated minimized erosion, thus minimizing the amount of silt that could clog the turbines of Bloede's Dam which generated electricity for surrounding communities.

On May 15, 1941, the camp was converted to the nation's first Civilian Public Service conscientious objector camp, with 26 men and three women required to serve for one year, a term that was extended as the United States entered World War II.

In 2015, 24.6 square miles which includes a portion of the Patapsco Valley State Park, was certified as the Maryland’s 13th Heritage Area by the Maryland Heritage Areas Authority. The Maryland Chapter of the Sierra Club opposed the project out of concern of additional development on the valuable land, of which the Maryland Department of Natural Resources would be the approving authority.

The park's recreational opportunities include hiking, fishing, camping, canoeing, horseback riding, mountain biking, and picnicking. The Baltimore City Paper named the park as its "Best Place to Hike" in 2007. 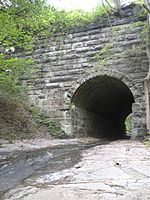 There are two swinging bridges that cross the Patapsco River. The first spans the Patapsco at Orange Grove, 1.6 miles (2.6 km) northwest of Avalon following the Park Road in Howard County beyond shelters 104 and 105. Prior suspension foot bridges at this location enabled residents of the Orange Grove mill community to cross the river to Baltimore County to work in the five-storey-high Orange Grove Flour Mill of the C.A. Gambrill Manufacturing Company that burned to the ground in 1905. Visitors can cross the bridge to discover the ruins of the mill site that extended from the railroad tracks to the Swinging Bridge abutment.

A second swinging bridge opened November 4, 2006. It is located at the end of the Grist Mill Trail and crosses the Patapsco River to connect with Ilchester Road. This new bridge allows easy entry for residents living in Ellicott City and Catonsville for the first time since Hurricane Agnes struck in 1972.

All content from Kiddle encyclopedia articles (including the article images and facts) can be freely used under Attribution-ShareAlike license, unless stated otherwise. Cite this article:
Patapsco Valley State Park Facts for Kids. Kiddle Encyclopedia.