Catonsville is a census-designated place (CDP) in Baltimore County, Maryland, United States. The population was 41,567 at the 2010 census. The community lies to the west of Baltimore along the city's border. Catonsville contains the majority of the University of Maryland, Baltimore County (UMBC), a major public research university with close to 14,000 students.

Europeans were the second group to settle the area now known as Catonsville. It is generally believed by historians that native tribes, known as the Piscataway, established villages here before the European colonists arrived. This tribe occupied the land between the Potomac River and Chesapeake Bay and up the Patapsco River. Catonsville was located along the Piscataway Trail. The colonists and the tribes got along until the mid-17th century, when the English government ended the practices of Catholic missionaries in the area. It is believed that the tribes were driven from their villages and some were hunted by slave catchers. As happened in many areas of early colonial America, diseases unknown to the tribes were spread by the colonists. Eventually, the tribes moved north under the protection of the Iroquois.

With most of the natives scattered, the colonists expanded across Maryland. Present-day Catonsville was settled in the 18th century. In the early 19th century, a county road along the Patapsco River—named the Frederick Turnpike, later designated Route 144—was opened by the Ellicott family to serve traffic between their flour mill, Ellicott Mills, and Baltimore. Catonsville as we know it today was settled along this route by Richard Caton, under the authority of his father-in-law Charles Carroll, a signer of the Declaration of Independence. Travelers along "the turnpike" (as it was then known) rested and conducted business in the area, causing Catonsville to grow.

The large Victorian and Colonial homes located in Catonsville were built by wealthy Baltimoreans. Originally, these communities were used as summer residences to escape the heat in Baltimore. Eventually, as in many communities with the introduction of the automobile and electric trolley, families began to reside in Catonsville year round. Baltimore attempted over the years to annex Catonsville, the last attempt in 1918, but all attempts were rebuffed. The community remains an unincorporated town in Baltimore County. It is home to Spring Grove Hospital Center, the nation's second oldest continuously operating psychiatric hospital.

Samuel Clemens (Mark Twain) made his last public appearance on June 9, 1909, at the commencement ceremony of St. Timothy's School for Girls in Catonsville, to fulfill a promise he made to a young girl he had met on the steamer Minnehaha in 1907.

Catonsville was briefly made quite famous during the 1968 protest by the "Catonsville Nine", during which draft records were burned by Catholic anti-war activists.

In 2002, the Maryland legislature issued a proclamation declaring Catonsville to be "Music City, Maryland", because of the concentration of musical retail stores, venues and educational facilities in the area.

In 2007 Money magazine ranked Catonsville the 49th best place to live in the USA, third best in Maryland and Virginia.

It is centered along Frederick Road (Maryland Route 144), formerly the main road from Baltimore leading to points west. Johnnycake Road and Academy Road form the northern and northeastern borders of Catonsville. Catonsville is bordered by Woodlawn to the north, Baltimore to the east, by Arbutus to the southeast, by Ilchester to the southwest, and by Ellicott City to the west.

In addition to Frederick Road (Exit 13), Interstate 695 (the Baltimore Beltway) services Wilkens Avenue (Maryland Route 372), Edmondson Avenue and the Baltimore National Pike (U.S. Route 40) via Exits 12, 14 and 15, respectively, with the latter two thoroughfares later converging in Baltimore City to the east. The main north-south roads in the area are Rolling Road (which is also Maryland Route 166 south of Frederick Road), Ingleside Avenue and Bloomsbury Avenue.

Catonsville is a terminus of the Trolley Line Number 9 Trail and the Short Line Railroad Trail.

Since 1947, Catonsville has celebrated Independence Day with children's games in the morning, a parade in the afternoon, and a fireworks display at night. The children's games include a decorated bike contest, lollipop scramble, ball on spoon race, leapfrog, wheelbarrow and sack races, and a water balloon toss. The parade travels down Frederick Road and is attended by over 60,000 people each year. Residents reserve prime viewing locations by placing their folding chairs along the parade route a week or two in advance of the celebration. The parade contains floats from politicians, local businesses, schools and churches along with marching bands, including Baltimore's Marching Ravens.

The fireworks display takes place on the grounds of Catonsville High School in the evening. Residents either walk to the high school or gather at other locations (such as UMBC) to watch the show.

Natives and residents of note 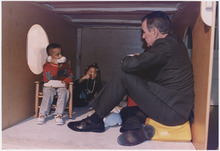 President Bush plays with children in a jungle gym at the Emily Harris Head Start Center in Catonsville.

The Maryland Transit Administration provides bus service to the Catonsville area via the Purple CityLink route with service to Downtown Baltimore, LocalLink routes 37 and 77, and Express BusLink 150 to Columbia. MARC Train provides commuter train service at the nearby Halethorpe station in Arbutus.

Major north–south routes in Catonsville include:

Major east–west routes in Catonsville include:

All content from Kiddle encyclopedia articles (including the article images and facts) can be freely used under Attribution-ShareAlike license, unless stated otherwise. Cite this article:
Catonsville, Maryland Facts for Kids. Kiddle Encyclopedia.