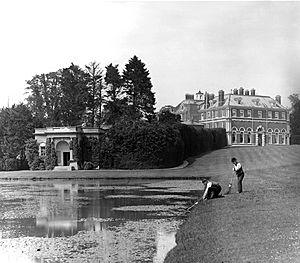 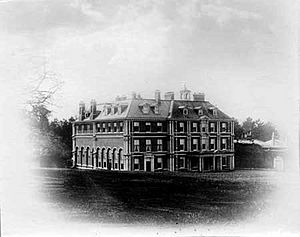 The Hall Barn estate was bought by Anne Waller in 1624. The house was built in the late-17th century by her son Edmund Waller, a poet and Member of Parliament at various times between 1624 and 1679. His grandson added the south wing. The estate was sold by his family in 1832 to Sir Gore Ouseley, 1st Baronet, who rebuilt the southern facade and was High Sheriff of Buckinghamshire for 1835.

Edward Levy-Lawson, 1st Baron Burnham bought the estate in 1880 and made a number of renovations and improvements, and the estate remains under the management of the Lawson family - Hugh Lawson, 6th Baron Burnham - in the early 21st century.

There were royal visits to the estate, including from the Duke of Cambridge in November 1902. The Princess Royal "took the salute" at Hall Barn in the 1940s at the Girl Guide County Rally.

During the Second World War, the house was used as a hospital supplies unit. In November 1946, the Hall Barn Estate was reported in Tatler as being the "lovely home" and venue for the wedding reception for extended family and friends of the newly-wed daughter of the "charming" Lord and Lady Burnham.

Hall Barn is listed Grade II* on the National Heritage List for England, and its landscaped park and gardens are also Grade II listed on the Register of Historic Parks and Gardens. The boathouse, the obelisk, and the "Temple of Venus" pavilion on the estate all date to the 18th century and are also listed as Grade II*.

Hall Barn has been used as a filming location for various films and series. In Gosford Park (2001) the opening sequence outside Lady Trentham's home was shot there, and the temple used as the scene for lunch after the shoot. Midsomer Murders Season 7, Episode 4 (2004) "Sins of Commission", prominently features the black gatehouse to Hall Barn. It featured in the series Downton Abbey as Loxley House, the home of Sir Anthony Strallan. The location was also used in the 1981 Oscar-winning film Chariots of Fire as the home of the composite character Lord Andrew Lindsay, who memorably practiced his hurdling skills on the lawn by perching filled champagne glasses on each hurdle to determine if he'd touched the hurdles or not on each jump. Hall Barn was also featured in the mini-series Sense and Sensibility (2008 miniseries), and used as the location for Delaford House. Black Beauty Film (1994)

All content from Kiddle encyclopedia articles (including the article images and facts) can be freely used under Attribution-ShareAlike license, unless stated otherwise. Cite this article:
Hall Barn Facts for Kids. Kiddle Encyclopedia.