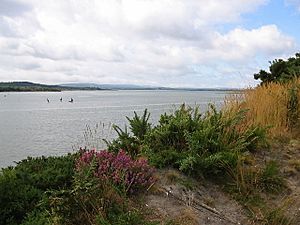 Ham Common is a Local Nature Reserve at Hamworthy, near Poole, Dorset. Located on the north west shores of Poole Harbour, it is predominantly a heathland site but includes many other habitats including waste ground, mixed woodland, and a freshwater lake (Hamworthy Lake). Parking for the site can be found at Hamworthy Beach with access to the waterside for kayaking etc, or above the common from Napier Road. Easy walking access from Haven Rockley Holiday Park.

Over 200 bird species, 34 butterfly species, and 25 Odonata species have been logged in the reserve.

All content from Kiddle encyclopedia articles (including the article images and facts) can be freely used under Attribution-ShareAlike license, unless stated otherwise. Cite this article:
Ham Common, Dorset Facts for Kids. Kiddle Encyclopedia.