Hamelia patens is a large perennial shrub or small tree in the coffee family, Rubiaceae, that is native to the American subtropics and tropics. Its range extends from Florida in the southern United States to as far south as Argentina. Common names include firebush, hummingbird bush, scarlet bush, and redhead. In Belize, this plant's Mayan name is Ix Canaan and is also known as "Guardian of the Forest". 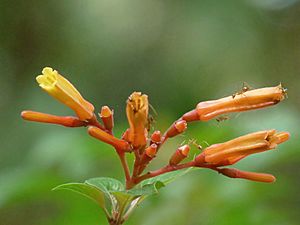 Firebush has orangish-red tubular flowers, which recruit hummingbirds and butterflies for pollination. The corollas vary greatly in length, making them attractive to a wide range of pollinators. The fruit is a small dark red berry, turning black at maturity.

Despite its somewhat scraggy appearance, this is a valuable garden tree in warmer climates and even in temperate ones, as long as the soil remains above freezing.

Hummingbirds are attracted by its flowers and other birds feed on the fruit, both of which will also forage on small insects found in the vicinity, helping to keep down pests. These flowers are also fed on by butterflies, such as the statira sulphur (Aphrissa statira), which are attracted to red flowering plants. The fruits have a refreshing, acidic taste and are also edible by humans; in Mexico, they are made into a fermented drink.

The plants are used in folk medicine for a range of ailments.https://floridata.com/Plants/Rubiaceae/Hamelia+patens/174

All content from Kiddle encyclopedia articles (including the article images and facts) can be freely used under Attribution-ShareAlike license, unless stated otherwise. Cite this article:
Hamelia patens Facts for Kids. Kiddle Encyclopedia.