Hamilton became a municipality on 11 December 1871 and was named in honour of Edward Terrick Hamilton, who was then Governor of the board of directors of the Australian Agricultural Company (AA Co), from August 1857 to September 1898. The AA Co. were instrumental in the growth of the area, operating the mines and owning most of the land.

The discovery of coal near St Peter's Church in the area known as Cameron's Hill, was the beginnings for the township of Hamilton (originally known as Pittown, Borehole or Happy Flat). A borehole was sunk and a shaft was completed in 1849 and was known as the D Pit, or borehole. Pittown grew up somewhere in the vicinity of today’s Beaumont street to service the needs of the miners and their families.

In 1947, Lettesi (a settler group made up of nearly 150 families from the village of Lettopalena in the Abruzzo Region of Italy), initially settled in Islington but they soon expanded into the nearby suburbs of Hamilton and Mayfield. This was primarily due to Islington's proximity to the BHP steel works. Before long Hamilton (especially Beaumont Street) was to become a strong community and commercial centre for Newcastle’s Italians. By the late fifties, the local Italian community began patronising the Australian owned Exchange Hotel, located on the corner of Beaumont and Denison Streets. It continues to be a regular meeting place for Italian men of Hamilton. The story of the Lettesi community in Hamilton can be read in the 'Hidden Hamilton' blog at http://hiddenhamilton.blogspot.com.au/2015/12/a-community-finds-its-place-lettesi.html. 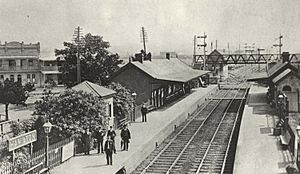 Hamilton's train station was constructed on the Islington Junction to Newcastle railway line. The station is 164 km (102 mi) from the Way & Works Branch and is 5.8 m (19 ft) above sea level. With the opening of the station in 1872, the importance of Hamilton as a suburb grew.

The station is served by NSW TrainLink's Hunter line to Maitland and beyond, and the Central Coast & Newcastle Line, which runs to Sydney.

Association football – After a recent name change by the Olympics, Hamilton is only represented by Hamilton Azzurri FC

All content from Kiddle encyclopedia articles (including the article images and facts) can be freely used under Attribution-ShareAlike license, unless stated otherwise. Cite this article:
Hamilton, New South Wales Facts for Kids. Kiddle Encyclopedia.