Hampton Beach is a village district, census-designated place, and beach resort in the town of Hampton, New Hampshire, United States, along the Atlantic Ocean. Its population at the 2010 census was 2,275. Hampton Beach is in Rockingham County, about 15 miles (24 km) south of Portsmouth. The community is a popular tourist destination and the busiest beach community in New Hampshire. Ocean Boulevard, the main street along the beach, includes a boardwalk, many shops and businesses, several seasonal hotels, and the Hampton Beach Casino Ballroom, which hosts national acts in the summer. Hampton Beach State Park was named one of four "Superstar" beaches in the United States in 2011, for having had perfect water-quality testing results in each of the previous three years.

The Hampton Beach Village District was established on June 26, 1907, to provide electric power and water to the summer tourist community. In 1923, the village's first fire station was built, after two fires destroyed a large section of the beach settlement in 1919 and 1922. The original fire station was razed and replaced in 2014.

On February 26, 2010, during a severe storm, a fire burned down all the buildings in a block at Hampton Beach, including the Surf Hotel, Happy Hampton Arcade, and Mrs. Mitchell's Gift Shop. The fire started in the Surf Hotel and was spread to the other buildings by high winds. The cause of this fire is unknown. The area has been rebuilt, with a larger hotel and a new Mrs. Mitchell's.

Most of the resort village lies on a barrier spit separated from the mainland by a large estuary system known as Hampton Harbor. The estuary serves as the mouth of several rivers, the largest being the Hampton River from the northwest. New Hampshire Route 1A serves as the main north-south route through the beach area, connecting the village to Seabrook Beach to the south (across the Hampton Bridge traversing the Hampton Harbor Inlet) and Rye Beach to the north. Access from the west is provided by three roads: New Hampshire Route 101 is the main access point to the densely populated southern resort area from most points west, while Winnacunnet Road (officially New Hampshire Route 101E) provides access to the less developed areas at the center of the village near a large salt marsh conservation area. Winnacunnet Road marks the northern edge of the census-designated place, but New Hampshire Route 27, known locally as High Street, marks the northern edge of the resort area.

The heaviest development lies south of the Ashworth-By-The-Sea hotel, located at the eastern terminus of NH 101 where it meets NH 1A, known locally as Ocean Boulevard. From this point south, NH 1A splits into two one-way streets: the southbound Ashworth Avenue, and the northbound Ocean Boulevard. Cross streets through this area run from A Street in the north to M Street in the south. The southern end of the spit is mostly state park, with little to no buildings or development. North of the junction of 101 and 1A, the area is much less developed, dominated mostly by a large salt marsh conservation area, with small businesses and bungalows along Ocean Boulevard (NH 1A). North of Winnacunnet Road (and outside the CDP), a second area of heavier development begins with Kings Highway parallel to Ocean Boulevard, and cross streets numbered from 1st Street in the south to 19th Street in the north. The resort ends at the Windjammer Hotel at its northern end, at the junction of NH 27 and NH 1A.

The Hampton Bridge carries Route 1A into the south border of the community.

The Hampton Beach Casino Ballroom has been the center attraction at Hampton Beach for more than 100 years. The Ballroom continues to draw some of the top names in entertainment. Recently, the Ballroom placed in the top 30 for worldwide ticket sales in venues under 3,000 seats.

Hampton Beach Seafood Festival - Since 1988, the Hampton Area Chamber of Commerce and Seafood Festival Committee have helped put New Hampshire on the map as a vacation destination. The Hampton Beach Seafood Festival has a profound effect on seacoast businesses, the community, and the overall economy of the area. Restaurants, lodging, shops, and businesses in general depend on the Seafood Festival as the primary contributor to their bottom line. Many Chamber members say it is even bigger than the "4th of July" in sales volume. The Festival, held the weekend after Labor Day, is also instrumental in extending the summer season. Dozens of non-profit organizations also earn a major portion of their income through revenues earned at the Festival, allowing them to continue to support their causes that benefit the citizens of New Hampshire. The Hampton Beach Seafood Festival has evolved dramatically, and has been acclaimed as "One of the Top 100 Events in North America", by the American Bus Association in 1996, 2001, 2003 and 2006. Event attendance is now estimated as exceeding 150,000.

Hampton Beach Sand Sculpture Competition - Since 2001, the Hampton Area Chamber of Commerce has sponsored, with the help of Seaside Hotel, a sand sculpture competition that has brought numerous sculptors from across America to Hampton Beach in mid-June. The 4 day contest is seen by thousands and then put up for illumination for two weeks. Prizes (top prize of $50,000) are rewarded via fan voting and through the Chamber.

Fireworks - There are fireworks on the 4th of July and every Wednesday of the summer at 9:30 pm. There are also fireworks held to cap the Hampton Beach Seafood Festival in September, with a launch scheduled for that Saturday at 8:15 pm. 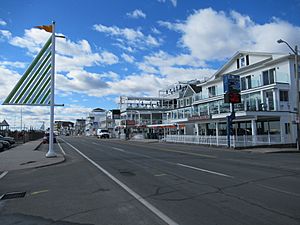 All content from Kiddle encyclopedia articles (including the article images and facts) can be freely used under Attribution-ShareAlike license, unless stated otherwise. Cite this article:
Hampton Beach, New Hampshire Facts for Kids. Kiddle Encyclopedia.