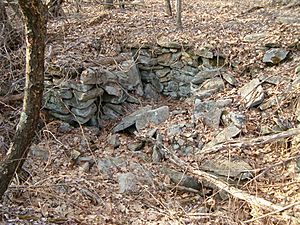 The remains of a building foundation at Hanton City.

The remains of Hanton City consist of several stone foundations, a burial site, a defunct dam apparently used for irrigation, and a dilapidated scattering of stone walls, typifying it as a standard small New England farming community. The entire site is completely overgrown, making it nearly impossible to locate when any vegetation is present.

At the time of its habitation, the small settlement was extremely isolated from the main town of Smithfield. For this reason, several theories have been posited in regards to its raison d'être.

The first theory is that the residents of Hanton City were a small band of runaway slaves united to live in secrecy in the wilds of then extremely rural Smithfield. This theory seems unlikely given the logistics of a renegade group of people's ability to procure the building materials and basic supplies needed to create even the most rudimentary settlement (let alone the outside goods required to maintain day-to-day life). 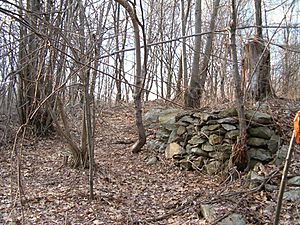 The remains of a stone wall at Hanton City, with surveyor's tape

The second theory is that the residents of Hanton City were all pariahs afflicted with a communicable disease that mandated their isolation from the general populace.

The third theory is that those who founded Hanton City were Loyalists: colonists who remained loyal to the king of England during the American Revolution. It is uncertain whether these Loyalists were forced to live in exile by the historically fiercely independent Rhode Islanders or whether they chose of their own volition to form an enclave of the politically like-minded. Several Tories from Newport were exiled to Smithfield and Glocester in 1776, including Thomas Vernon whose diary was published.

The wooded area in which Hanton City is located is currently owned by The Dow Chemical Company. The presence of orange surveyor's tape suggests the area's imminent development. The small Alfred Smith Cemetery is located in the area. The only readable names are Alfred, Eliza and Emor Smith. "Hanton City Trail" in Smithfield and "Hanton Road" in North Smithfield serve as reminders of the now defunct village.

All content from Kiddle encyclopedia articles (including the article images and facts) can be freely used under Attribution-ShareAlike license, unless stated otherwise. Cite this article:
Hanton City, Rhode Island Facts for Kids. Kiddle Encyclopedia.