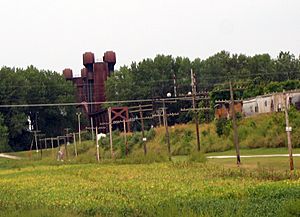 The Harry S Truman Bridge is a vertical lift rail drawbridge over the Missouri River connecting Jackson County, Missouri with Clay County, Missouri in Kansas City, Missouri. It has a 427 foot main span, and is the tenth longest span in the United States.

It is now used by the freight trains of the Canadian Pacific and Union Pacific Railroad to cross the Missouri River.

All content from Kiddle encyclopedia articles (including the article images and facts) can be freely used under Attribution-ShareAlike license, unless stated otherwise. Cite this article:
Harry S. Truman Bridge Facts for Kids. Kiddle Encyclopedia.