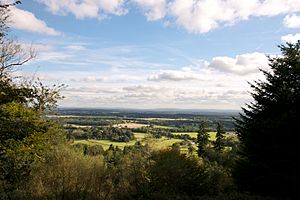 Hascombe Hill or Hascombe Camp is the site of an Iron Age multivallate hill fort close to the village of Hascombe in Surrey, England. 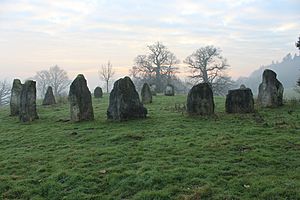 The site was excavated in 1931 by S. E. Winbolt, who dated the occupation of the site to the 1st century BC. The hillfort encloses a thickly wooded area of approximately 2.4 hectares (6 acres). The sides of the fort, which are naturally very steep, were scarped at the top to make them almost unassailable. Encircling the crest of the hill is a defensive ditch 1.5 metres (5 ft) deep. The defences are reinforced on the northeast side (where the hillfort joins the rest of the hill) with a strong line of ramparts and ditches broken by a single entrance passage some 24 metres (80 ft) long.

In the early 19th century it became an important naval telegraph station, using a mechanical form of semaphore to communicate with Netley Heath in Surrey on one side and Blackdown in Sussex on the other. A chain of such stations linked London with Portsmouth.

The height of Hascombe Hill is 644 feet.

In the 1990s the Modern Order of Druids erected a stone circle below the south-eastern slopes of Hascombe Hill.

All content from Kiddle encyclopedia articles (including the article images and facts) can be freely used under Attribution-ShareAlike license, unless stated otherwise. Cite this article:
Hascombe Hill Facts for Kids. Kiddle Encyclopedia.