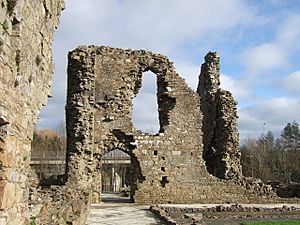 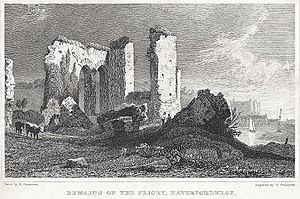 Haverfordwest Priory (Welsh: Priordy Hwlffordd) was a house of Augustinian Canons Regular on the banks of the Western Cleddau at Haverfordwest, Pembrokeshire, Wales. Dedicated to St. Mary and St. Thomas the Martyr and situated on land given by Robert fitz-Richard, castellan of Haverford Castle and second cousin of Gerald of Wales. The priory was first mentioned around 1200.

At the time of Henry VIII’s Dissolution of the Monasteries (1536–1541), it was acquired by Roger and Thomas Barlow, brothers of William Barlow, bishop of St David's.

From 1983 to 1996, the site (now under control of Cadw) was excavated and the outlines of the buildings are visible. Much architectural material of a high standard was discovered and can be seen in Haverfordwest museum. Also unearthed was a unique medieval garden with raised beds.

All content from Kiddle encyclopedia articles (including the article images and facts) can be freely used under Attribution-ShareAlike license, unless stated otherwise. Cite this article:
Haverfordwest Priory Facts for Kids. Kiddle Encyclopedia.