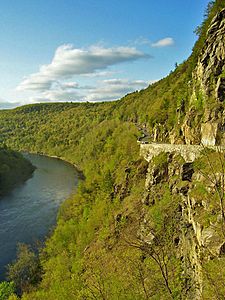 The Hawk's Nest is a scenic location outside Port Jervis, New York high above the Delaware River on New York State Route 97. Its name is derived from the birds of prey that nest in the area. The location is also known for its winding roads and scenic overlooks in the Delaware River Valley.

Route 97 was originally a one-lane dirt road built in 1859. It was paved between 1931–1933 and subsequently dedicated in 1939, and rededicated on September 21, 2002, as part of the "Upper Delaware Scenic Byway" (according to a historical marker placed by the Town of Deerpark, where Hawk's Nest is located).

All content from Kiddle encyclopedia articles (including the article images and facts) can be freely used under Attribution-ShareAlike license, unless stated otherwise. Cite this article:
Hawk's Nest, New York Facts for Kids. Kiddle Encyclopedia.