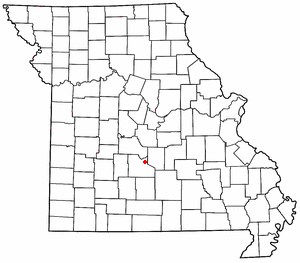 Hazelgreen is an unincorporated community in eastern Laclede County, Missouri, United States. It lies along historic U.S. Route 66, now an outer road of Interstate 44. The town is split by I-44, just west of the 145 exit. 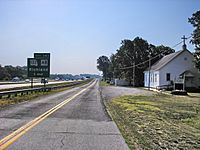 Along former US 66 in Hazelgreen.

A post office was established at Hazelgreen in 1858, and remained in operation until 1958. The community was named for the hazel bushes near the original town site.

All content from Kiddle encyclopedia articles (including the article images and facts) can be freely used under Attribution-ShareAlike license, unless stated otherwise. Cite this article:
Hazelgreen, Missouri Facts for Kids. Kiddle Encyclopedia.