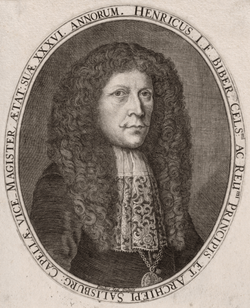 A portrait of the composer, engraved by Paulus Seel for Biber's Sonatae Violino solo (1681)

Heinrich Ignaz Franz Biber von Bibern (baptised 12 August 1644 – died 3 May 1704) was a Bohemian-Austrian composer and violinist. He was the most famous German violinist of his time. He is particularly famous for his violin sonatas.

Biber was born in a small Bohemian town near Reichenberg. Nothing is known about his music education. We know that in the mid-1660s he went to work for Prince-Bishop Karl, Count Liechtenstein-Kastelkorn of Olomouc. The prince loved music and kept many musicians at his court. During the winter of 1670-1671 Biber became a member of the Kapelle at Salzburg court. He was married there in 1672. There he played the violin and trained the choirboys and composed a lot of music. He probably had a lot of contact with other well-known musicians such as Georg Muffat. Although he was the greatest virtuoso of his time he hardly seems to have travelled about to play.

In 1690 Biber was raised to the nobility. During his last years he seems to have spent much of his time composing works for the theatre as well as sacred music.

All content from Kiddle encyclopedia articles (including the article images and facts) can be freely used under Attribution-ShareAlike license, unless stated otherwise. Cite this article:
Heinrich Biber Facts for Kids. Kiddle Encyclopedia.