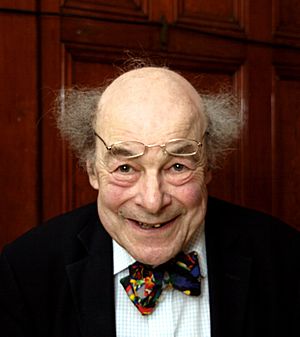 Heinz Siegfried Wolff (29 April 1928 – 15 December 2017) was a German-born British scientist, and television and radio presenter. He was best known for the BBC television series The Great Egg Race. He was born in Berlin, Germany.

Because they were of Jewish descent, he and his family fled to the United Kingdom in September 1939.

He studied physiology and physics at University College London. He specialized in biological engineering, and was a professor at Brunel University.

A familiar face in the 1970s and early 1980s, well known to British television audiences with his memorable bow tie and pronounced German accent.

All content from Kiddle encyclopedia articles (including the article images and facts) can be freely used under Attribution-ShareAlike license, unless stated otherwise. Cite this article:
Heinz Wolff Facts for Kids. Kiddle Encyclopedia.