The Hemet Maze Stone is a prehistoric petroglyph. It is just outside Hemet in Reinhardt Canyon, within the Lakeview Mountains, in Riverside County, California. On April 16, 1956, it was donated, along with 5.75 acres (23,300 m2) of land, to Riverside County, by Mr. and Mrs. Rodger E. Miller. It is California Historical Landmark No.557. The government has installed two perimeter chain link fences around the petroglyph landmark, making direct appreciation, study or an unobstructed picture difficult. The surrounding land has been set aside for the protection of native plants and animals (with a warning that the “natural features may be hazardous”), and is at the end of California Avenue to the north of Highway 74 and several miles east of Interstate 215, near Hemet, California. According to a sign where the road has been blocked off to prevent people from driving closer to the Maze Stone, people with questions can call the Riverside County Parks Open Space Office at 909-245-1212. 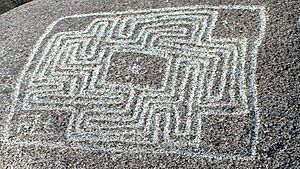 Closeup of the Maze Stone

The "maze" consists of two rectangular boxes—one large and containing the other; centered. If one traces the patterns with different colored markers, one would find that between the boxes are two contiguous geometric patterns that resemble a maze. One "maze" is contained by the other on the left hand side.

The swastika that appears in the lower left hand corner is not part of the original work as evidenced by a 1930s era photo featured in the Hemet Centennial calendar (featured photo of July 2010; available from the Hemet Museum located at the old train depot on the northwest corner of State and Florida). The stone and its surrounding land became a California state landmark in 1956, and sometime thereafter a vandal added a counter-clockwise swastika to one corner of the carving. This is not the same swastika that the Nazis in Germany appropriated after WWI; the Nazis used the clockwise version of the swastika. Swastikas were used in Oriental and Native American art long before the symbol became associated with Adolf Hitler. The stone is now protected by a pair of chain-link fences.

The maze petroglyph, depending upon interpretation, could show four walled structures or areas, consisting of two simple objects and two “maze-like” complex objects. There is an inner and outer object for each type of simple or complex object. To reference the diagram called “Conceptual Approximation of the Maze Stone near Hemet, California,” the "simple" objects are denoted by the square/rectangular black (outer) and gray/beige (inner) lines. The gray/beige area is filled in and appears as a rectangular object. What the computer considers a gray color, other people say is the color beige. The "complex" objects are blue (outer) and purple (inner). Notice how the purplish complex object is completely surrounded by the blueish complex object. The inner objects are completely surrounded in the space created by the outer objects. The blueish object seems to surround the simple gray object in the center, but is unable to completely do so, and the gray/beige object is either directly attached and is completely surrounded by the space associated with the outer black boundary wall that surrounds the whole “maze.” Taking away or adding the blue and purple areas makes no difference to the relationship between the inner gray/beige object and the outer black boundary line, as the space between them is still connected. The space inside the black line was left white/blank. Be aware the diagram was created with visual guesswork from multiple pictures using a computer graphics program to draw straight, colorized lines without measurements.

The petroglyph appears to be a square, although the attempt to redo the diagram by computer produced better results when slightly elongated into a rectangle. Also the original is on the slightly curved surface of a stone, although there were flatter stones that could have been chosen in the region. Whether the maze can be recreated in a square while attempting to keep all the lines uniformly separated on a flat surface is a question that arose while creating the conceptual approximation diagram. Since there are ten lines to be crossed on the top, bottom, left and right of the original petroglyph, it stands to reason the idealized version of the “maze” could fit into a square.

The original design constraints and reasoning behind the prehistoric design remain unclear even today, but show in the choices made while creating the “maze.” To give a few examples, at any given spot in the blueish space, there are up to three possible directions to follow, not the four directions possible when 90 degree line segments join together. The outside edge of the outer complex object shows the outline of the inner complex object three times. There are three “dead ends” (in maze terminology) to the blueish-object’s area. If one looks at the spot where two of the blueish ends meet before reaching the inner complex object on the left side, one would have to transverse six straight segments to reach that point – from either end point. The analysis discussion can also be changed by switching the walls to pathways and the pathways to be impassable areas, but the “maze” has design features that have nothing to do with a conventional “maze” where the objective is to go from a starting point to an ending point through a confusing set of passageways. The Maze Stone is certainly not what might be considered a regular maze, even though it may look like one. Without knowing the original intent of the creator, it is difficult to know if the maze represents an engineering drawing, a symbol, an artistic concept or something else.

This petroglyph is classified as California Engraved, within the California Tradition of rock art.

All content from Kiddle encyclopedia articles (including the article images and facts) can be freely used under Attribution-ShareAlike license, unless stated otherwise. Cite this article:
Hemet Maze Stone Facts for Kids. Kiddle Encyclopedia.