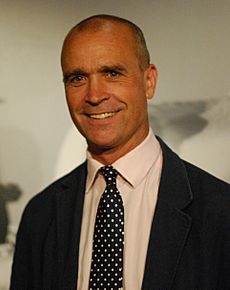 Lieutenant Colonel Alastair Edward Henry Worsley MBE (4 October 1960 – 24 January 2016) was a British explorer and British Army officer. He was part of the successful 2009 expedition that followed Ernest Shackleton and Robert Falcon Scott's footsteps in the Antarctic. He was born in London.

Worsley was a soldier in the British Army for 36 years. On 12 October 1993, Worsley was appointed a Member of the Order of the British Empire (MBE) "in recognition of distinguished service in Northern Ireland".

Worsley died while on a trip in Punta Arenas, Chile from multiple organ failure caused by surgery on 24 January 2016 at the age of 55.

All content from Kiddle encyclopedia articles (including the article images and facts) can be freely used under Attribution-ShareAlike license, unless stated otherwise. Cite this article:
Henry Worsley Facts for Kids. Kiddle Encyclopedia.