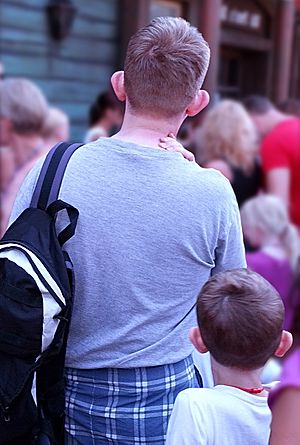 Heredity of phenotypic traits: Father and son with prominent ears and crowns.

Heredity is the passing of traits (characteristics) from parents to offspring. In biology, the study of heredity is called genetics. With most living things, heredity is analysed by breeding (making crosses), often in a laboratory. But with humans, heredity is studied in other ways. Family pedigrees, identical twins and DNA genome analysis all provide clues.

A trait which may be inherited is heritable; it is inborn or innate.

All content from Kiddle encyclopedia articles (including the article images and facts) can be freely used under Attribution-ShareAlike license, unless stated otherwise. Cite this article:
Heredity Facts for Kids. Kiddle Encyclopedia.