Hexbug is a brand of toy automatons developed and distributed by Innovation First International, Inc. Hexbug, inspired by BEAM robotics uses many elements from it. First piloted in the US through RadioShack, it is now sold in most major retail stores. The original toy is based on six-legged arthropods but now comes in several different varieties. The name "Hexbug" relates to the six-sided packaging it is sold in, rather than to its number of legs.

The Beetlebug, the initial Hexbug model, is a toy that reacts to loud sounds and pressure on its antennae and scurries around the room. It was available in five different shapes and colors: Alpha (orange), Bravo (green), Charlie (blue), Delta (yellow), and Echo (red). The toy debuted in 2007 at RadioShack stores.

The hi-tech HEXBUG Beetle, a micro robotic creature, will travel in a straight line until it hits an object in its path or hears a loud noise. Upon contact or noise, the bug reverses in a half circle, then moves forward in a new direction. Featuring bump sensor feelers, it crawls and senses objects. It is available in multiple colors and comes with two batteries. It is suitable for children eight years of age and older.

The Spider is a remote-controlled hexapod robot able to change direction by its head rotation. The head presses the leg joints into moving forward in the direction where the head is pointed. It is powered by three replaceable LR44 (AG13) Button cell batteries.

The Battle Spider is a variant of the Spider. Equipped with an LED light and sensor, it can engage in laser-tag battle. Unlike the standard Spider and the Battle Spider 2.0, the first edition of the Battle Spider can only move forward. It is powered by three replaceable LR44 (AG13) batteries.

The Battle Spider 2.0 is a revised edition of the Battle Spider. It can walk backwards like the original Spider and is powered by three replaceable LR44 (AG13) batteries.

The Scarab is a fast-moving mechanical robot made to resemble a beetle with six legs. Its movement is autonomous and random, reacting to obstacles with a rapid change in direction. The Scarab automatically will return to its feet if it is upside-down. Internal gears and motors are visible through its translucent shell. It is powered by three replaceable LR44 (AG13) batteries.

The Tarantula is an eight-legged remote-controlled robot resembling the Strandbeast. It can move in all directions as well as rotate.

The Battle Tarantula features the same functions as the Tarantula but can shoot as well as move. 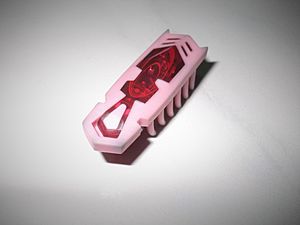 A development of the Nano v2 (2013) released in 2017. These bugs, like their v2 and original counterparts, are also bristlebots. An improvement is that they have five spines on their back rather than the v2's three spines. Another improvement is reduced oscillation. With less oscillation these bugs can move faster. Their spines enable them to climb vertically between two suitably-spaced plates or tube walls. The five spines on their backs enhance their stability compared to the v2, particularly when self-righting from their backs.

A variety of clear plastic tube habitats are offered with the toys, ranging from a simple vertical tube for climbing, through to multi-bot habitats in clear plastic, with horizontal arenas linked by curved climbing tubes. Additional construction set tube parts are also available, including twisted tubes, funnels and black holes.

A line of miniature robotic fish released in 2013. Their built-in sensors detect liquid, which activates the caudal fin for propulsion through the water. Available as a fish, jellyfish, wahoo, and seahorse.

A line of construction sets for building robots, VEX Robotics kits allow a player to build their own contraptions as well as up-scaled versions of Hexbug products. It is named after the VEX Robotics learning platform developed by Innovation First, which was prominently utilized for STEM education.

The Crab was the second bot manufactured for Hexbug. It only moved sideways and reacted to obstacles, light and sound by reversing direction. It was withdrawn in September 2014, most likely due to a common defect with its back legs.

The Larva was a worm-like robot with an infrared eye which avoided objects in its path. Its battery use, however, was very strong. It was withdrawn in February 2015.

The Inchworm slithered like a worm, but also had legs.

All content from Kiddle encyclopedia articles (including the article images and facts) can be freely used under Attribution-ShareAlike license, unless stated otherwise. Cite this article:
Hexbug Facts for Kids. Kiddle Encyclopedia.