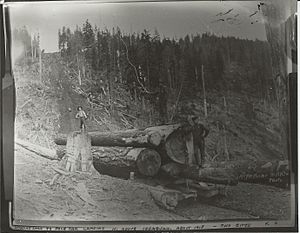 High Point is an unincorporated community in King County, in the U.S. state of Washington.

High Point, on the eastern fringe of Issaquah, is named for its location at the highest point on a railroad grade. Once the location of a significant lumber mill and railway station, it is now only a small collection of houses on large lots along I-90 at the "High Point Way" exit, and a Tiger Mountain trailhead.

A post office called High Point was established in 1910, and remained in operation until 1943. The community was so named on account of its lofty elevation.

All content from Kiddle encyclopedia articles (including the article images and facts) can be freely used under Attribution-ShareAlike license, unless stated otherwise. Cite this article:
High Point, Washington Facts for Kids. Kiddle Encyclopedia.