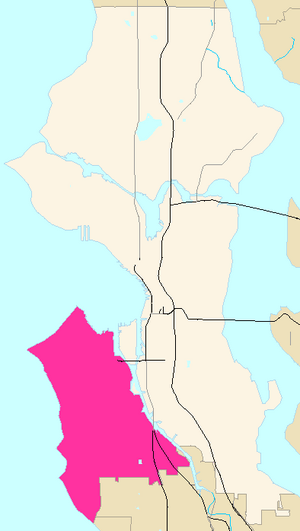 West Seattle comprises two of Seattle, Washington's thirteen districts, Delridge and Southwest, and encompasses all of Seattle west of the Duwamish River. It was incorporated as an independent town in 1902 and was annexed by Seattle in 1907. Among the area's attractions are its saltwater beach parks along Elliott Bay and Puget Sound, including Alki Beach Park and Lincoln Park. The area is also known for its views of the Olympic Mountains to the west and the Cascade Range to the east. Fully 1/3 of Seattle's green space and urban forest is located in West Seattle, much of it found in the West Duwamish Greenbelt. 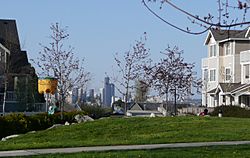 View of downtown Seattle from one of several common greenspaces

High Point is a neighborhood in the Delridge district of West Seattle, Washington, United States. It is so named because it contains the highest point in Seattle: the intersection of 35th Avenue SW and SW Myrtle Street is 520 feet (160 m) above sea level. The neighborhood is located on the east side of 35th Ave SW, with approximate north and south boundaries at SW Juneau Street and SW Myrtle Street.

The hill is dominated by two huge water towers, and is also the location of Our Lady of Guadalupe School and Parish, on the peak of the highest hill in West Seattle. It is also known for the High Point Projects which were torn down in 2005 to make way for new mixed-income housing. High Point is one of Seattle's most diverse neighborhoods, with a substantial immigrant population from Southeast Asia and East Africa. 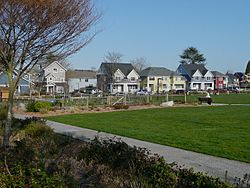 The neighborhood was originally developed during World War II to provide government housing, and it remained a district of predominantly low-income housing through the 1990s. In 2003, the Seattle Housing Authority began work on the first phase of a six-year project to redevelop High Point into a mixed-income community. The redevelopment removed all existing housing, roads, and utilities. In their place, new roads, underground infrastructure, about 1,600 new housing units, and community facilities were built. 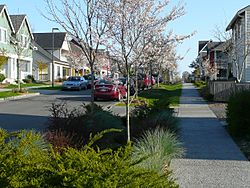 Houses are built close to the street. Bioretention swales or rain gardens treat and control stormwater from the streets with plants.

The redevelopment embraced many sustainable development principles. The site and rental housing are certified at the highest BuiltGreen levels; most housing is Energy Star rated. The site makes extensive use of permeable paving, including porous sidewalks, parking areas, and the only porous pavement street in Washington state. Some houses were built to reduce symptoms for people with asthma. The neighborhood redevelopment plan has been recognized with some of the most prestigious land use and development awards, among them the 2007 ULI Global Award of Excellence, the 2007 EPA National Award for Smart Growth, and the 2007 Rudy Bruner Award for Urban Excellence. 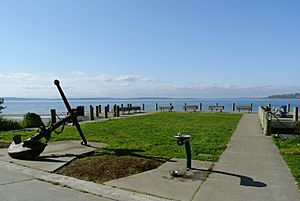 Alki Point is traditionally credited as the point where the Denny Party founded Seattle prior to moving across Elliott Bay to what is now Downtown. A similar landing at Alki has been reenacted annually since 1950 as part of the colorful, week-long Seafair celebration of Seattle's marine and boating interests. Seafair coincides with West Seattle festivities including Hi-Yu and the West Seattle Summer Fest street festival held each July. Along with its historical significance Alki is the home of the most popular beach in the Seattle area. Fittingly named Alki Beach, it offers a significant strip of sandy beach full of driftwood, seashells, and fire pits. Low tides offer West Seattlites an opportunity to explore marine life in tidepools. Additionally, Alki hosts a flat bike/running trail from which people can view the Seattle skyline, Puget Sound, and the Olympic mountains. 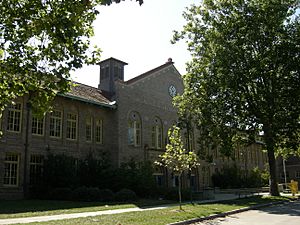 The heart of West Seattle is the intersection of California Avenue S.W. and S.W. Alaska Street, called "The Junction", the center of a lively business district.

The Westwood Village shopping center, between S.W. Trenton and S.W. Barton Streets in the south end of West Seattle, has undergone several makeovers and now provides a mall-like shopping experience, including a box store and a large bookstore from a national chain. However, it is unlikely that a movie theater will be allowed here because of restricted parking. 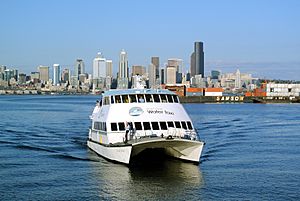 West Seattle is served by bus service from King County Metro, including the RapidRide C Line. There is a Washington State Ferries dock in the Fauntleroy neighborhood, with service to Vashon Island and to Southworth on the Kitsap Peninsula. The passenger-only King County Water Taxi also runs between Duwamish Head and downtown Seattle.

West Seattle has beautiful parks along the water front, including Lincoln Park and the Emma Schimtz Overlook to Jack Block park facing the port. The West Seattle Golf Course, West Seattle Stadium and Camp Long Outdoor Learning Center are found in the middle of the peninsula with unique opportunities to recreate outdoors including overnight camping in rustic cabins. In addition, Seattle Parks and Recreation maintains Community Centers (Alki, Delridge, and Hiawatha), Coleman Pool, SouthWest Pool and the SouthWest Teen Life Center. There is an historic bath house on Alki Beach as well as the Dakota Place Park with its restored light station.

There are many neighborhoods within West Seattle.

All content from Kiddle encyclopedia articles (including the article images and facts) can be freely used under Attribution-ShareAlike license, unless stated otherwise. Cite this article:
West Seattle, Seattle Facts for Kids. Kiddle Encyclopedia.