The Hindu Temple of Greater Chicago (HTGC) is a Hindu temple complex in Lemont, Illinois, established in 1977. The complex includes two separate temples:

Adjoining the Vivekananda Spiritual Center, on "Vivekananda Hill", a hillock in the temple campus, is a 10-foot tall bronze statue of Swami Vivekananda, modeled after his photograph taken in Chicago after his appearance at the World's Parliament of Religions in 1893. It is the first statue of Vivekananda to be installed in a public place in the United States of America.

Perched on a wooded hillside above the Des Plaines River valley in Lemont, Illinois, the temple represents one of the most impressive feats of devotion outside India. The temple complex consists of four buildings, the Rama temple, Ganesha-Shiva-Durga temple a community center connecting the two temples and Vivekananda Spiritual Center.

The Rama temple is built to specifications in the authentic style of the Chola dynasty (a 10th-century dynasty of Indian Kings). The temple's architecture is a perfect blend of the ancient with the modern. Its magnificent 80-foot tower (Gopuram) is a potent symbol of Hindu spirit. A large hall in the lower level of the temple has facilities to stage cultural events.

A smaller temple north of the Rama temple is the Ganesha-Shiva-Durga temple. This temple is built in the architecture style of the Kalinga dynasty (1st century B.C.E.).

Sri Ramanavami occurs in April and celebrates the birthday of Sri Rama and his marriage to Sita Devi which also took place on his birthday. Rama the seventh incarnation of Sri Vishnu, was born on the ninth (navami) day of Chaitra (March–April) maasa (month).

Shiva Ratri is celebrated on Krishna Chaturdashi day (14th day of a Lunar Month) in the month of Magha (Feb-March) to commemorate the day on which Shiva protected the world from total annihilation by drinking the Kalakanda poison which was held in his throat.

Janmastami celebrated the birthday of Sri Krishna, the eighth incarnation of Sri Vishnu. Rasa Lila is performed to recreate incidents from the life of Krishna and to commemorate his love for Radha. The image of Krishna is bathed at midnight, placed in a cradle and worshiped.

Deepavali or Diwali is a festival celebrated throughout India with different regional significances. Deepavali is known as the festival of lights. Deepavali celebrates the homecoming of Rama after defeating Ravana.

Dussera or Dasara festival lasts for ten days. During this festival, Ram Leela or the story of Sri Rama is enacted with the burning of the effigy of Ravana. The festival is also known as Navarathri and is celebrated over nine days. The tenth day is known as Vijaya Dasami.

Holi is celebrated at the end of the winter season on the last full moon day of the lunar month Phalguna (February/March). The festival is celebrated with children and adults throwing colors at each other and concluding the festival with a bonfire. The bonfire, called Holika Dahan, signifies victory of good over evil and also the triumph of devotion to God.

Other major festivals celebrated at the temple include (but not limited to) Ganesha Chaturthi, Makara Sankranthi, Brahmotsavam, Summer Festival (Greeshma Mela) and New Year's Day.

HTGC celebrates many special events like Kumbhabhishekam conducted once in 12 years (1986, 1998 and 2007). In 2010 Sri Sri Ravishankar of Art of Living inaugurated the Swami Vivekananda Spiritual Center. In the year 2011, during the month of June (June 8—12), HTGC celebrated 25 years of the construction of Sri Rama Temple in a grand manner with numerous religious and cultural programs.

Ganesh-Shiva-Durga Temple on the temple campus at The Hindu Temple of Greater Chicago in Lemont, Illinois 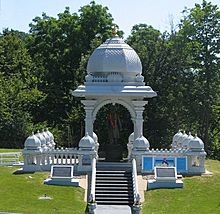 Vivekananda Statue on the temple campus at The Hindu Temple of Greater Chicago in Lemont, Illinois

HTGC-Sama-Rathi-Auditorium on the temple campus at The Hindu Temple of Greater Chicago in Lemont, Illinois

The temple also houses an Auditorium and a Dining hall (in the lower level). It also has a Library with a media center.

The following activities are conducted at HTGC. They are open to all.

All content from Kiddle encyclopedia articles (including the article images and facts) can be freely used under Attribution-ShareAlike license, unless stated otherwise. Cite this article:
Hindu Temple of Greater Chicago Facts for Kids. Kiddle Encyclopedia.